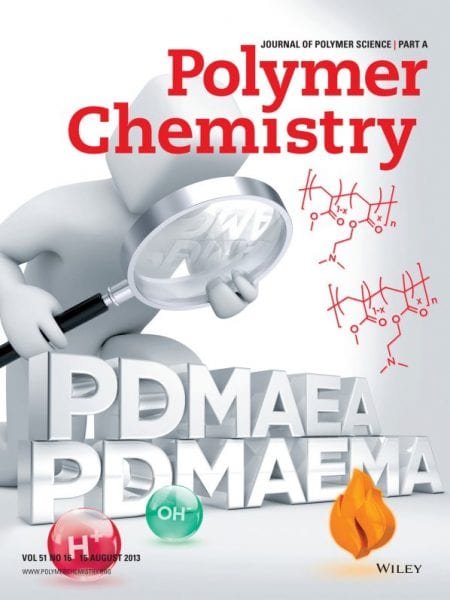 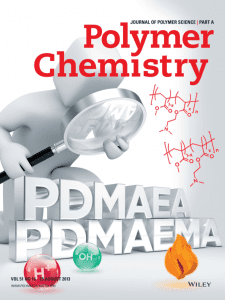 Four articles from the Journal of Polymer Science Part A: Polymer Chemistry are featured in Volume 51, Issue 16: “A Comparative Study of the Stimuli-Responsive Properties of DMAEA and DMAEMA containing polymers,” “Effect of Temperature and Solvent on Polymer Tacticity in the Free-Radical Polymerization of Styrene and Methyl Methacrylate,” “Thermally Amendable Tailor-Made Functional Polymer by RAFT Polymerization and ‘Click Reaction,’” and “Synthesis and Properties of Butyl Rubber-Poly(ethylene oxide) Graft Copolymers with High PEO Content.”

Stimuli-responsive polymers have potential applications in surface coating, waste-water treatment, oil recovery, and drug release. However, when amine molecules are covalently linked into a polymer structure, it becomes difficult to predict that pH-dependent protonation behavior. Rachel K. O’Reilly and colleagues control molecular weight and polydispersity of dimethylaminoethyl acrylate (DMAEA) copolymerization via reversible addition-fragmentation chain transfer. The results indicated that, by reducing the amine loading, the pKa measurement can be increased.

A polymer’s tacticity can affect important physical properties such as melting point, glass transition temperature, and mechanical strength. Radical polymerization is an inexpensive route to producing high yield polymers, but it has no control over tacticity. Michelle L. Coote and Leese M. Smith aim to provide benchmark values for tacticity of polymers produced by radical polymerization of styrene over a variable range of solvents and temperatures.

Polyisobutylene (PIB)-based materials have mechanical properties similar to human soft tissues in addition to high chemical and biological stability. By incorporating poly(ethylene oxide) (PEO)  into PIB, it can impart amphiphilicity, mechanical strength, thermoplasticity, and resistance to protein adsorption. Elizabeth R. Gillies and associates demonstrate the beneficial effect of high PEO content in providing stable films capable of encapsulating and releasing payloads while resisting the cell growth on their surfaces. This ability combined with the lack of toxicity in vitro makes the designed copolymers promising for a wide range of applications.