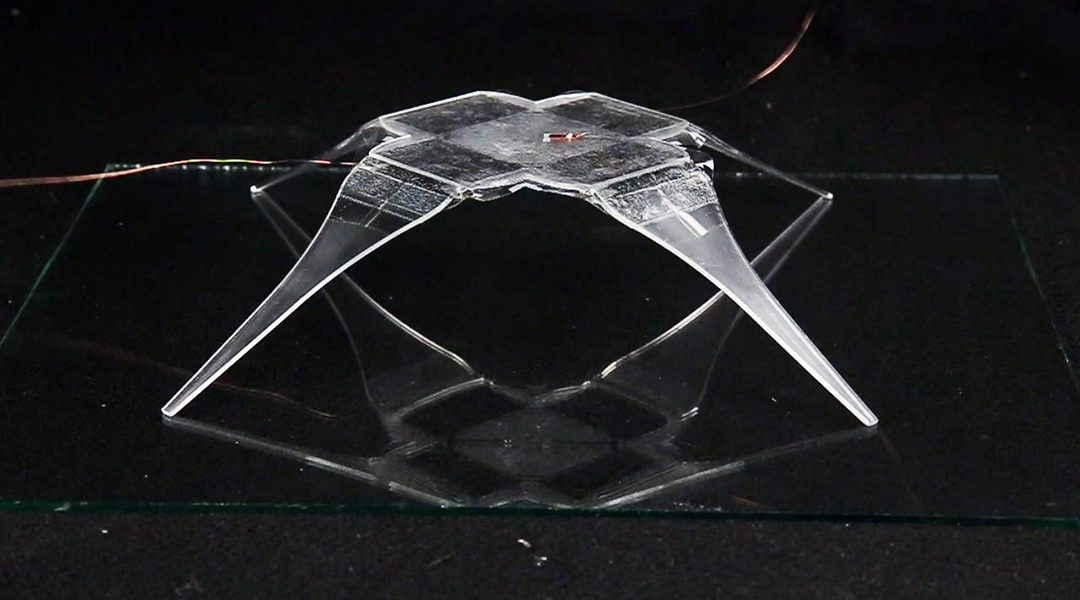 Goodbye, bulky components and connectors, hello, lightweight robots! A team of scientists at the Max Planck Institute for Intelligent Systems in Germany and at the University of Colorado Boulder in the US has now found a new way to exploit the principles of spiders joints to create lightweight robots.

It is not the first time that spiders have served as biological models in the research field of soft robotics. The hydraulic actuation mechanisms they apply to move their limbs when weaving their web or hunting for prey give them powers many roboticists and engineers have drawn inspiration from.

The new joints drive articulated robots without any bulky components and connectors, which normally weigh them down and reduce portability and speed. The slender, lightweight and simple structures of these arachnobots enable a range of structures with different functionalities, such as a jumping robot that can leap over 10 times its height, a fast-acting bidirectional joint, an artificial limb with three independently addressable joints, and a three-finger gripper capable of both delicate and powerful grasps.

The high performance is enabled by spider-inspired electrohydraulic soft-actuated joints or SES for short. The joints can be used in many different configurations — not just when creating an arachnobot. In their paper, the scientists demonstrate a bidirectional joint, a multi-segmented artificial limb, and a three-fingered gripper, which can easily pick up delicate objects. All creations are lightweight, simple in their design, and exhibit high performance making them ideal for robotic systems that need to move rapidly and interact with many different environments.

The researchers developed their SES joints based on the HASEL technology, which had previously been invented by the team to build artificial muscles. SES joints mimic a spider-inspired exoskeletal mechanism comprised of both rigid and softer elements, which function similarly to the animal’s leg extension through the use of hydraulic forces.

They built a flexible pouch made of thin plastic films (either polyester or polypropylene will do), which they filled with a liquid dielectric — a vegetable-based oil. They then placed electrodes on each side of the pouch. These liquid-filled pockets serve as actuators, in which the hydraulic power is generated through electrostatic forces. The pouch is attached to a rotary joint. When a high voltage is applied between the electrodes, the electrostatic forces cause the liquid dielectric to shift inside the pouch and the joint to flex. SES joints are capable of rotating up to 70 degrees, causing high torques, and can easily restore back to the starting position.

“The SES joints are very simple and light, as there are no peripheral components which weigh down the robot,” said Christoph Keplinger, Director of the Robotic Materials Department at the Max Planck Institute for Intelligence Systems. “Many applications for soft robots require versatile actuators. These spider-inspired joints allow for high functionality and consume only little power, they are easy and cheap to make — the plastics we are using are for food packaging — and their production is easily scalable. These are all qualities that are critical for the design of robots, which can move in many different ways and manipulate a variety of objects without breaking them.”

A three-fingered gripper was one application for which the team used SES joints to showcase their versatility. If the team had equipped the gripper with a muscle-like structure, it would have been in the way of the object that the gripper is grabbing. Using SES joints as the hinges of the gripper required much less space.

“The research stands out because we can use a wide variety of materials, even the plastic used to make chips bags to create the pouches,” the first author of the publication Nicholas Kellaris said. “That way we can implement SES in a wide variety of geometries with specifically tuned actuation characteristics.”

“The ultimate goal of our research was not to make a spider robot,” Philipp Rothemund, the second author of the publication, added. “We wanted to develop a state-of-the-art, active joint that you can put in any type of robot.”

Especially for small-scale robotic systems of only a few centimeters in size, where the limited space severely restricts the choice of actuator technologies, the SES-joints will come in very useful. For the soft robotics community, this invention is truly a leap forward.