Organic solar cells could be an important part of future power generation, but only if their efficiency increases. 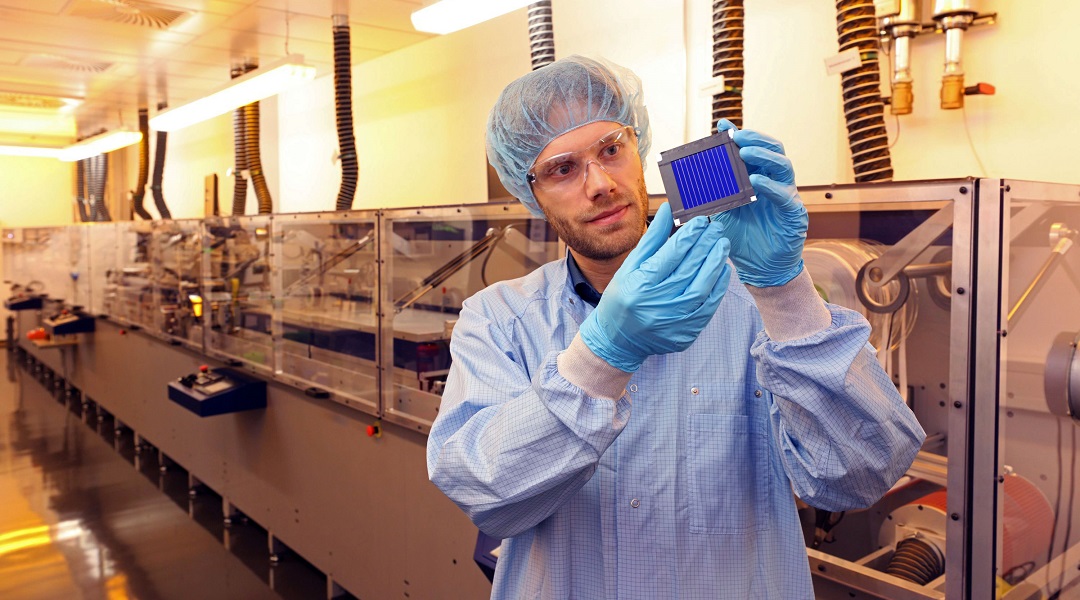 Organic solar cells usually consist of different organic components, possessing the necessary semiconductor properties. In contrast to conventionally used silicon, which is manufactured using energy-intensive melting processes, organic materials are relatively inexpensive due to lower costs of production and material, and are advantageous as they are flexible and easy to handle, and can be applied directly from solution onto a film or glass carrier.

While there are many advantages to organic solar cells when compared to conventional silicon-based cells, only a relatively low level of efficiency has been achieved using these alternative materials.

Now, a research team from Nuremberg and Erlangen has set a new record for the power conversion efficiency of organic photovoltaic modules. The scientists from Friedrich-Alexander Universität Erlangen-Nürnberg (FAU), the Bavarian Center for Applied Energy Research (ZAE), and the Helmholtz Institute Erlangen-Nürnberg for Renewable Energy (HI ERN) in cooperation with the South China University of Technology (SCUT), designed an OPV organic solar cell with an efficiency of 12.6% (the former world record was 9.7%) over an area of 26 cm². This is the highest efficiency ever reported and was confirmed by an independent certification laboratory.

This milestone in organic semiconductor research shows that the latest performance developments with certified cell efficiencies of over 16% are not limited to the laboratory scale, but ready to be scaled up to the level of prototype modules.

“The active layers used in the manufacturing of these solar modules are only 100nm-200nm thick. This is less than the wavelength of visible light”, explains Dr. Jens Hauch, project lead. “Up-scaling these coatings defect free to areas of several hundred square centimeters with a thickness uniformity of ca. 10 nm is always one of the biggest challenges when producing such record modules.”

However, due to their design, the efficiency of complete photovoltaic modules is always slightly lower than that of individual cells. A part of the module area, for example, is always inactive since it is used for the interconnection of the individual cells. With an increasing module area, the losses caused by the electrodes’ electrical resistance increases as well.

According to Hauch: “The minimization of the interconnect area, which connects the individual cells into a module is also a challenge. Due to the high currents that these modules generate the individual cells are rather narrow. In the area of the interconnects however no current is produced, therefore they are a ‘dead area’ on the module. This area needs to be minimized in order to keep the efficiency high. In our case the interconnects are created with laser processes. Each interconnect consists out of three parallel laser cuts which are ca. 30µm-40 µm apart. Generating these cuts on hundreds of cm of length poses a large challenge.”

The record module consists of twelve serially connected cells and has a geometric fill factor (the ratio of maximum obtainable power to the product of the open-circuit voltage and short-circuit current) of over 95%. This part of the module area actively contributes to the power generation. With respect to its active area, the module even achieves an efficiency of 13.2%. The minimization of inactive areas was achieved through high-resolution laser structuring.

“We want to further increase the size of the modules while keeping the efficiency as high as possible,” Hauch says. “Apart from that we would like to transfer the modules from glass onto flexibles substrates and move the processing to ‘green’, environmentally friendly solvents. These are our next challenges.”