Solar-driven H2O splitting into H2 and O2 using semiconductor materials is one of the approaches that is nowadays explored to produce energy, with the attempts of reducing global reliance on fossil fuels and thus limiting carbon dioxide emissions.

Since a major contribution to the solar spectrum is given by the visible and the infrared light portions (i.e., the UV component only accounts for 5% of the entire solar emission), researchers in this field aim at identifying semiconductor materials that are active under visible/IR illumination.

In line with this, the last 50 years have faced the development of two different, competing but not conflicting, research lines: i) the modification via e.g. intrinsic/extrinsic doping and/or surface decoration of TiO2, i.e. the benchmark, milestone material for light-driven applications since the early 1970s, and ii) the identification of semiconductors that intrinsically feature catalytic activity under visible light illumination. 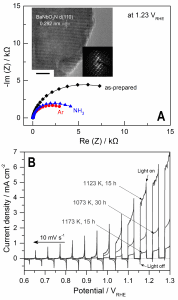 It is in this context that Prof. Domen and collaborators reported on the synthesis, characterization and solar-driven water oxidation activity of a perovskite-type BaNbO2N photoanode. BaNbO2N is an n-type AB(O,N)3 oxynitride (where A = La, Ca, Sr or Ba and B = Ti, Ta, Nb) that absorbs a large portion of visible-to-near IR wavelengths. The band-gap (Eg) of AB(O,N)3 can in particular be tuned by simply changing A/B compositional ratio. Of all the possible perovskite-type oxynitrides, Nb-based ones hold a major interest as solar energy conversion materials due to their narrower band-gap compared to that of Ti- and Ta-based oxynitrides, and due to the larger natural abundance of Nb compared to that of the two other metals. However, the photo-electrochemical water splitting activity of such Nb-based AB(O,N)3 perovskites is typically low as nitridation of the oxide precursor in NH3 flow also yields detrimental Nb5+ reduction with the consequent formation of surface defects or impurities that ultimately affects photo-activity.

Suppressing the reduction of Nb during the synthesis of perovskite oxynitrides is therefore critical for achieving high water oxidation activity. This could be in principle achieved if milder nitridation conditions could be applied. However, moderate annealing typically results in a low crystallinity of the oxynitride that, in turn, enhances the recombination of photoexcited holes and electrons thus (again) affecting photo-activity.

In this study, a “customized” annealing method that consists of sequential thermal treatments is developed to enhance the crystallinity of BaNbO2N and overcome the detrimental Nb reduction: first, annealing of the oxide precursor, Ba5Nb4O15, in NH3 under moderate conditions led to amorphous BaNbO2N; annealing afterwards in inert Ar atmosphere promoted the crystallization of the amorphous phase (see inset in Figure A), while simultaneously suppressing the reduction of Nb5+ species. As a consequence of the high material crystallinity, charge transfer resistance from the photoexcited semiconductor to the electrolyte was also suppressed (Figure A) and higher photo-electrochemical water oxidation on BaNbO2N was measured. In particular, upon BaNbO2N decoration with Co(OH)x-FeOx co-catalyst, a material photoresponse that extends up to 740 nm was observed, and a photocurrent of 5.2 mA cm-2 at 1.23 VRHE was measured under solar irradiation (Figure B).

The authors thus concluded that such “nitridation-inert annealing” treatment sequence is an efficient approach to suppress the formation of inactive surface states due to the nitridation of nonstoichiometric precursors while simultaneously promoting the crystallinity of BaNbO2N, and anticipate that this treatment has the potential to be extended to various (oxy)nitride materials that, in spite of their optical properties, currently still exhibit a below-the-standard photoresponse under sun light illumination.

Today’s green investment is tomorrow’s emission reduction — models must grasp this
Magnesium Batteries: An Alternative to Lithium?
Replacing toxins with water in the green production of plastics
A New Lightweight Material for Efficient Vehicles