Although the idea of soft robots in space exploration is still far from becoming a reality, there are obvious advantages that are driving researchers to pursue the possibility. 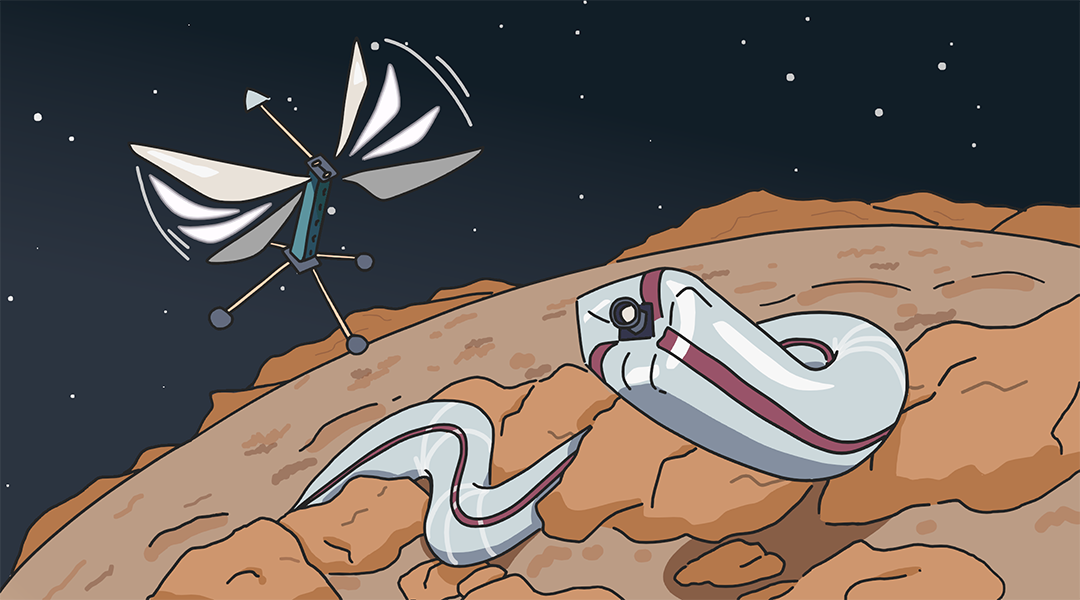 Humankind has long held a fascination for the stars, and over the last 50 years, we have developed the means to finally begin exploring them. This has been no easy feat — space is a hostile environment of impossible size with the farthest borders of our Solar System alone requiring half a lifetime to reach.

So, we deploy robots. Space agencies around the world have been using robotic probes and explorers to visit other planets and celestial bodies to learn more about our universe. In addition to minimizing risk to human life, robots are better suited for these types of missions as they require less consumables (food, water, oxygen) to operate, are better suited to the extremes of space, and might also result in less contamination of alien worlds compared to humans, who, with every step and breath, may unintentionally introduce a foreign entity to that environment.

Recently, NASA and the China space agency began renewed explorations of the Martian surface using robotic vehicles, seeking out evidence of life on our neighboring planet. These robotic vehicles are state-of-the-art, built specifically to transverse harsh and rocky terrains in order to collect vital samples. Countless hours went into their development, ensuring they would be able to operate in an environment that is significantly different from Earth’s.

With planned missions to a number of planets, moons, and asteroids within our Solar System in the coming decades, robot designs need to account for extreme differences in temperature, pressure, chemical environments, gravity, and radiation.

Some experts believe that soft robots can provide an edge over their rigid contemporaries.

“While deploying robotic technologies for such space missions represents a significant milestone for humanity, these untethered robots may have limited dexterity and robustness due to them having rigid bodies,” says Guo Zhan Lum, robotics professor at Nanyang Technological University.

Lum has been working in the field of robotics for 12 years and has gained expertise in soft robots, especially on their locomotion and gripping functions. He believes that sending soft robots — those made of flexible materials similar to living organisms — would enhance future planetary explorations and wants to get that conversation started.

Compared to traditional robotics, the field of soft robotics is relatively new and draws heavily from the way living organisms move and adapt to their surroundings. Their abilities come from their being made from flexible and malleable materials, such as polymers, elastomers, and hydraulic fluidics, which allow them to accomplish tasks previously impossible through rigid robotics. Imaginative advancements have been made in recent years, with robots that can independently monitor environments, make surgery safer, and interact with safely with humans.

Though perhaps the idea of soft robots in space is still far from becoming a reality, there are obvious advantages that are driving researchers to pursue the possibility. “Soft robots are known to have significantly higher degrees-of-freedom than their rigid counterparts,” said Lum. “This unique feature [lends them] higher dexterity, shape morphology, and mechanical functionalities.”

Depending on the particular application and requirement, the best shape and locomotion strategy will vary substantially — a freedom allowed by soft robots. For example, a risk for the Mars rovers, which rely on wheels, is getting stuck or sinking in loose-gravel terrains. Soft robots that replicate the side-winding movement used by snakes could allow them to safely move across it. Similarly, flapping-wing robots, which mimic how birds and insects fly, have been shown to be much more resilient and agile than rigid helicopters on Earth.

Chelsea Shan Xian Ng, a Ph.D. student at the School of Mechanical and Aerospace Engineering at Nanyang Technological University, argues that soft robots are tougher and more durable than traditional robots, citing an example of a soft robot that could walk under cold, strong winds with temperatures of 264 K (-9.15 °C) at 40 km/h in snow. “This same robot even remained functional after being run over by a car,” she said.

There are still limitations — as in any field — that need to be overcome before soft robots get launched into space. For one, extreme environments, such as low or high temperatures, constrains the choice of soft materials when building a robot for these purposes. “The hydrogels and organogels used for fabricating some types of soft robots may freeze [or melt],” added Ng. “A potential solution, which is currently being explored, is to expand the working temperature of these gels by adding ionic compounds.”

Perhaps the way forward is not one or the other, but a combination of the two. “A hybrid rigid-soft robot could be an exciting possibility,” said Lum. “Having soft and rigid components could potentially allow it to concurrently inherit the respective advantages from both components. As an example, such robots may have a soft-body that can perform dexterous locomotion to negotiate across unstructured terrain as well as rigid end-effectors that can efficiently execute tasks that demand high stiffness too.”

It will no doubt be exciting to see where innovations in this area develop, with agencies such as NASA and the European Space Agency (ESA) expanding into soft robotic technologies for future missions. “Soft robotics is still a relatively young and emerging field, [and] more research is required before they will be ready for such missions,” added Lum. “We hope that our perspective can help to spark further discussion and inspire new research, which can push the boundaries of soft robotic technology so that these machines can eventually be deployed for future space missions.”

Waning immunity and COVID-19 boosters modeled in digital town
Growing nerve cells: The longer the cell, the better the model
Is dopamine more than just a feel-good hormone?
Impact sensor to measure the force of headers