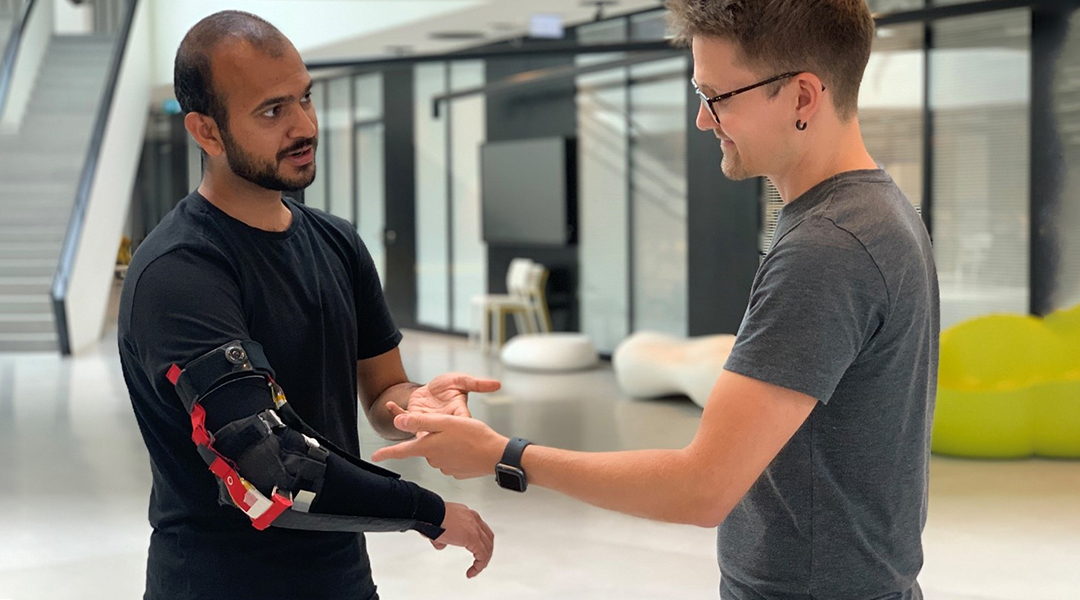 Imagine yourself learning to master a tennis forehand swing. The countless number of hours spent watching online tutorials could be put to better use if there was a way for your body to know where, when, and how your arm should move to craft that perfect stroke. Fortunately, this dream is not far from reality.

In recent years, wearables have been gaining steam and in particular, haptic wearables — a unique type of human-computer interaction driven by touch — are becoming ubiquitous for several daily-use devices.

Scientists have been using these devices in many applications: helping stroke patients regain their autonomy, to remotely control drones, and just for fun in virtual reality games. Haptic wearables make these applications possible because they transmit information from the robot to the human body through the sense of touch. Often, the wearable applies forces directly to the part of the body that is responsible for the error and enables real-time information transfer between the user and the robot as well as its environment. This is a significant step towards a more intuitive connection with robots that allows humans to collaborate with them more effectively.

While an exciting technological development, there are still hurdles to overcome. For one, complete freedom and ease of wearability has not yet been achieved, with a majority of them either fixed to the ground or requiring the use of heavy motors that restrict natural mobility and induce user fatigue.

To circumvent this problem, researchers from the École Polytechnique Fédérale de Lausanne, Switzerland have created a fabric-based, lightweight haptic sleeve that controls drone flight through arm movement and helps train users by applying corrective forces to body joints. So, if you were that auto-didactic novice tennis player from before, this sleeve would help you learn the forehand swing using the essentially the same technique used for Flappy Bird!

The idea for the new haptic sleeve is based on the concept that people learn to perform motor activities better when they are conscious of their errors and make a concerted effort to correct them. For example, in a racing game a controller might vibrate if the car leaves the racetrack. The haptic sleeve was built to test this claim in a more tactile environment where a group of people were trained to remotely guide a simulated drone through a narrow, circular tube.

Whenever the drone gets too close to the tube walls, users receive haptic feedback that prevents their arm from steering the drone further towards it, thus preventing collisions.

Once this first task was complete, to examine skill retention, subjects performed a second drone flight in which they navigated a series of rings spaced at equal distances from one another but at different heights.

Users who were trained with haptic feedback from the sleeve performed both tasks better than those who wore the sleeve but only received visual feedback. For instance, one user commented that the “haptic feedback was super helpful” and that the task “felt more natural to perform” as a result.

This test demonstrates that the haptic sleeve can help users both learn and retain motor skills by a heightened awareness of their errors, all without the use of actuators. Prior to the haptic sleeve, users would have to spend a considerable amount of time learning to use conventional controllers, such as joysticks that are not intuitive to use. Furthermore, wearable haptic interfaces powered by bulky motors could reduce body mobility and induce fatigue over prolonged usage. The use of textiles makes the sleeve particularly more natural on the skin and allows for integration with regular clothing.

A new class of haptic interfaces such as the one introduced in this sleeve can be scaled to provide feedback to more body joints. Given the modularity of the electroadhesive clutches, an interface could be developed for the entire arm from the fingertip to the shoulder, thus allowing users to control a swarm of robots, their spread, their speed, and their movement in space.

While the sleeve is demonstrated for learning to control drones in this study, they can be tailored to help users with a variety of applications, including sports, manual handling, movement therapy, dancing, playing instruments, and so much more.

The alliance of data, human experts, and machines to design better medicinal drugs
A robotic arm modeled after the human shoulder
Anyone can control injection molding with an AI helper
A robot in chameleon skin uses nature’s active camouflage