Materials which can improve drug absorption in the body have been developed using silicon dioxide nanoparticles. 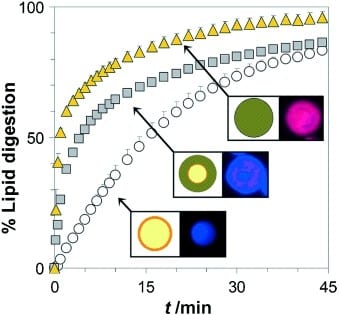 Functional lipid-based microparticles can be used to mimic the pharmaceutical food effect and enhance drug absorption by controlling the enzymatic digestion of lipid colloids.

Some medicines have to be taken either before, after, or during a meal because food ingredients can affect their absorption or bioavailability. Australian researchers have now encapsulated drugs in a matrix of silicon dioxide and lipids to simulate the administration of pharmaceuticals with food. As the researchers report in the journal Angewandte Chemie, drug absorption is increased through control of the enzymatic digestion of the lipid droplets.

For example, the body only absorbs fat-soluble vitamins A and D in the presence of some fat. Also, the bioavailability of many poorly water-soluble drugs increases when they are taken with high-fat meals. There are many techniques for the lipid-based delivery of pharmaceuticals, including emulsions, micelles and “packaging” in liposomes. These methods prevent the active ingredients from precipitating out and improve transportation to the absorption sites in the gastrointestinal tract. However, in order for the drug to become active in the body, it must be released from its lipid shell. The enzymatic decomposition of the lipid coating plays an important role in this process, but it has proven to be difficult to control. In addition, it is difficult to calculate the extent to which such lipid “packaging” really increases the bioavailability of a drug.

Clive Prestidge and a team at the University of South Australia and Monash University have now developed a controllable packaging type. Their material consists of a nanostructured network of silicon dioxide nanoparticles that contains nanoscopic lipid droplets containing the drug. This system is produced by generating a fine emulsion of the drug-containing oil droplets in an aqueous phase. The silicon dioxide particles collect around the droplets at the phase boundary. Spray-drying results in solid microparticles of entrapped lipid droplets.

The team has demonstrated that the lipid in these microparticles is enzymatically digested much more rapidly than pure lipid drops. This is because the nanostructured silicon dioxide network holds the enzymes close to their substrate. The size of the silicon dioxide particles used and the porosity of the resulting matrix determine how fast the enzymatic decomposition of the lipids occurs.

Animal trials with Celecoxib, a drug used to treat arthritis, showed a higher drug content in plasma when the pharmaceutical was orally administered in this new form rather than in its pure state or as drug-containing lipid drops. In contrast to Celecoxib-containing lipid drops, the release rate did not vary from batch to batch or after a longer storage period.