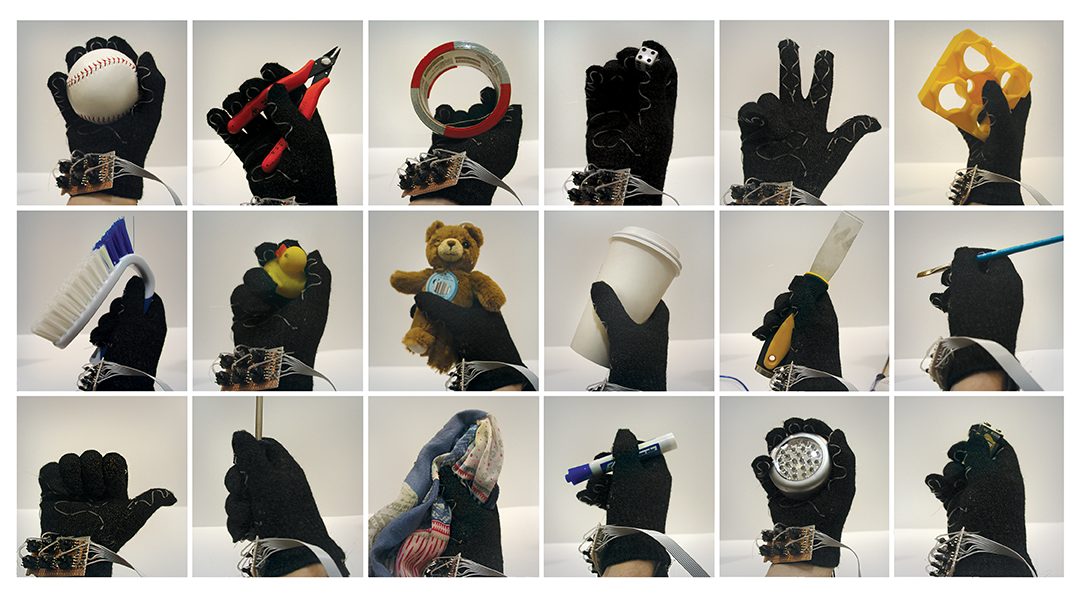 The human hand is a natural marvel of perception. Coupling positional and environmental sensing, humans are able to detect pressure, temperature, and posture, among other sensory inputs. Further, humans are able to reason about these inputs to solve higher level tasks such as determining grasped objects from feel alone. Engineers have long attempted to develop artificial skins and gloves that can approach the human hand’s precision and versatility, citing applications to virtual reality, robotics, and other fields.

Existing gloves, until now, have lacked the rich mixed modal sensing and higher-order reasoning of the human hand and brain. But in a recent paper published in Advanced Intelligent Systems, researchers from MIT detail the development of a new, low-cost, fiber-based, and easy-to-fabricate wearable smart glove. The glove, named the “Mens et Manus Glove” or “MemGlove,” fuses resistive sensing and fluidic pressure sensing for rich downstream sensing applications.

These two sensing modalities are uncoupled, meaning they don’t interfere with one another, and measure separate types of stimuli. In the study, users wore the glove and performed tasks such as writing certain letters or grasping certain objects. Data recorded from each sensory input while accomplishing these tasks was then leveraged to train deep machine learning models. These trained models enabled the glove to reason about these tasks, answering questions such as “which object is being grasped?”, “which letter is being written?”, or “what are the angles of all of the joints in the hand?” with high accuracy.

One of the main strengths of MemGlove’s design is that it is entirely based on off-the-shelf components and has a simple fiber-based construction, making it amenable to machine manufacturing and large-scale production.  In order to fabricate the glove, the researchers began with a fully conductive knit glove — the type used for interacting with capacitive-touch smartphone screens. They then sewed in electrodes at judiciously chosen locations.

By measuring the effective resistance among all pairs of electrodes, the machine learning model could infer a detailed map of the glove’s strain, and therefore, the pose of the hand. They further sewed tubes into the glove and connected them to pressure sensors, which could measure the induced pressure when interacting with the environment, and thus, grasping force.  Combined, the glove could accomplish a set of sensing tasks ranging from pressure and force sensing to state-of-the-art full hand reconstruction. The sensing suite even allows for some surprising environmental inference, including grasped material conductability, grasped object temperature to better than 1 degree Celsius accuracy, and wearer heart rate.

The researchers envision that the glove can have wide applicability to many fields. For instance, it can be used as an input device for richer environmental interaction in virtual and mixed reality, a data collection tool for health analytics in tracking wearer strength, pulse, or coordination, or as a quality assurance monitor in manufacturing.

In the future, the researchers hope that the same sensing architecture can be applied to other domains, such as giving robotic grippers a more human sense of touch.

What COVID-19 vaccine should I get? Whichever one you are offered, say experts
A new, inhaled siRNA therapeutic option for asthma
Biodegradable patch improves tissue repair
Zhenan Bao: Shaping the future of wearable electronics