Cancer is a devastating, and in some cases lethal disease because of its treacherous nature, and the sheer number of cancer patients. In the United States alone, more than 14 million people lived with cancer in 2013. Cancer researchers and oncologists have made great strides in deciphering and developing therapies for different cancer types. But they still have a lot of work ahead of them.

Clinical oncologists still heavily depend on radiotherapy, chemotherapy, medications, and surgery in their fight against this disease. These therapies work, for the most part. Yet, they are accompanied by serious adverse effects. Chemotherapy drugs are conventionally delivered to the target sites intravenously or orally. A major flaw in both delivery mechanisms is their nonspecific manner, delivering a cytotoxic drug to healthy tissues and organs. Hair loss, waves of nausea, and other systemic toxicities have been reported in most cancer patients. The reduced drug efficacy also prolongs the treatment, adding to a cancer patient’s suffering.

In recent years, cancer researchers have focused their efforts on delivering anticancer drugs using nano- and microcarriers directly to tumor sites to increase their efficacy and eliminate the detrimental side effects.

In this Biotechnology and Applied Biochemistry study, Jong-Oh Park, Sukho Park and colleagues from Robot Research Initiative at Chonnam University developed a controlled-release drug delivery system that uses focused ultrasound to deliver poly-lactic-co-glycolic acid docetaxel (PLGA-DTX) nanoparticles encapsulated with alginate microbeads. They identified the optimal delivery parameters for the focused ultrasound by comparing the results of the experimental injection into the degassed swine muscle and the computer simulation using COMSOL Multiphysics 4.3a with and without PLGA-DTX. Through these experiments, the authors determined these parameters to be as follows: peak pressure of 1 MPA, 10 cycle/burst, and burst period of 20 mSec. Finally, they demonstrated that the uptake, efficacy, and cytotoxicity of PLGA-DTX-encapsulated alginate microbeads were significantly enhanced when delivered by a focused ultrasound sonication, confirming its viability as an effective induction method for anticancer chemotherapy. 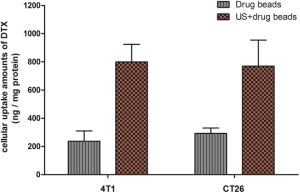