Shining a Light on the Nicobar Pigeon

The iridescence of Nicobar pigeon plumage is put under the microscope. 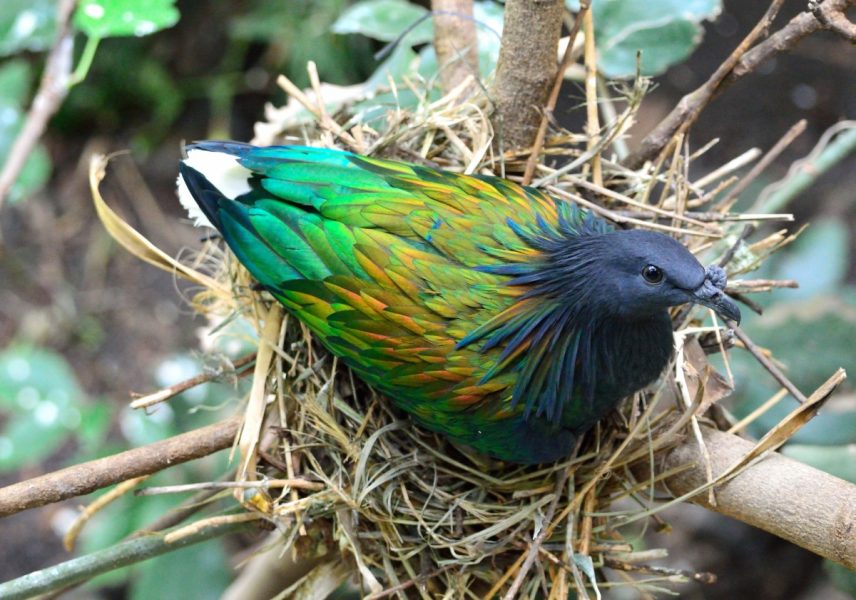 The closest living relative to the dodo is the ‘Nicobar pigeon’. It’s found predominantly along the south coast of Asia, between India and Vietnam. Their heads and necks are grey, but as their plumage continues toward the tail, iridescent greens, blues, and reds predominate.

As far back as 1665, scientists have been examining the mechanisms that lead to iridescence in bird feathers, but until a recent paper in Advanced Optical Materials, the plumage of the Nicobar pigeon had escaped attention. 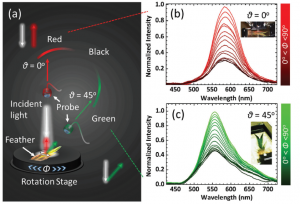 The Nicobar pigeon’s coloration must be more complex than simple pigmentation because two people viewing the same feather from different angles see completely different colors. To quantify the effect, the ‘perceived color’ of light was measured at 0 degrees from a light source, and again at 45 degrees. Although there was some variability in the results, in general the feathers appear to be blue shifted when perceived from 45 degrees.

A series of experiments were then carried out, in which the effects of two further variables on perceived color were investigated. Changing the distance from which the feather is perceived was found to augment the color of perceived light. In contrast, rotation of the feather around the plane of a viewing platform did not modify the color of the feather, but altered the brightness of the colors instead. 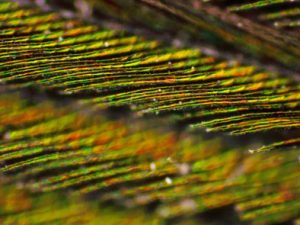 A view of the feathers from under a microscope.

Based on these results, a mechanism for the iridescence of Nicobar pigeon wings is proposed. The variation of observed color and brightness at different viewing angles suggests that the wavelength of perceived light is generated by light travelling through multiple layers of structure. Changing the angle of perception changes the distance that the light must travel through the layers, and the degree to which it is scattered.

A biological structure that corresponds with the proposed iridescence mechanism is proposed. It is suggested that the barbules (feather segments) of a Nicobar pigeon possess multiple layers of transparent keratin film that encapsulate air-filled cavities.

In addition to deepening our understanding of Nicobar pigeon biology, it is hoped that a clearer insight into the mechanics behind their feather coloration might inform the design of wavelength-selective filters, sensors, and nanophotonic devices.

Cold War nuclear bomb tests reveal true age of whale sharks
Human-on-a-chip provides an accurate model for the immune system
Can Microalgae Make Martians of Humankind?
Becky Smethurst: “My hobby is my job, with a bit of extra stress”