Shape-Shifting Polymer Circles in on Itself 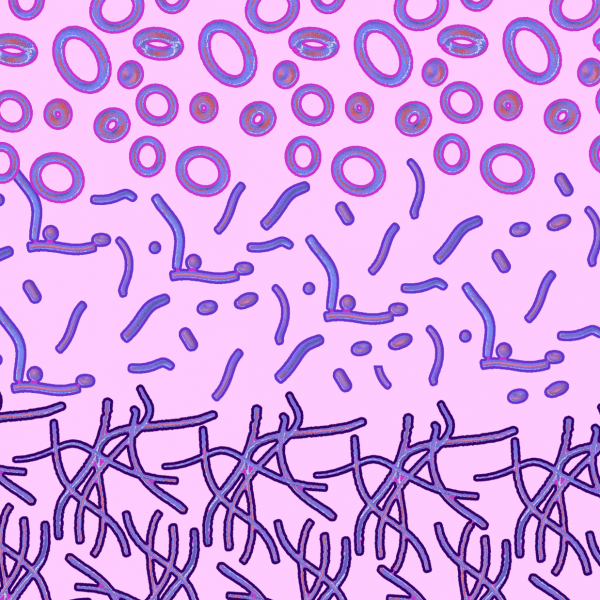 Researchers from the Chinese Academy of Sciences have developed triblock copolymer micelles that undergo controllable morphological changes from rod-like to toroidal. The changes are reversible and can be tuned by temperature. The work is published in the Journal of Polymer Science Part B: Polymer Physics.

The researchers were interested in creating a synthetic material that mimics biological structures, as some natural structures, such as β-barrels and α-helical bundles, are ring shaped. Some forms of DNA also present as rings. Ring-shaped synthetic molecules have potential applications as templates in protein synthesis to develop transmembrane channels. Temperature control provides an easy method for creating toroidal morphologies.

The micelles were composed of poly(4-vinyl pyridine) (P4VP) and polystyrene (PS) at a ratio of P4VP43–b-PS260–b-P4VP43. The PS block acts as a hydrophobic core, while the P4VP block acts as the hydrophilic corona. At room temperature, PS is below its glass transition temperature and P4VP interacts strongly with water, making the toroidal morphology highly stable.

Toroids were created by immersing the polymer in a dioxane/water mixture. Initially at 20°C, the polymer presents as rod-like fibers with lengths in the micron range. After 12 hours, the rods shorten and spheres form. After 24 hours, vesicles are present along with the first formation of rings. After 48 hours, the majority of the micelles are present in the toroidal morphology. The toroidal morphology was preserved by quenching the micelles with additional water and removing the dioxane through dialysis.

Progression of the transformation from rod-like to toroidal over a 48 hour period.

When the temperature is increased to 40°C, the rings begin to transform back into rod-like fibers, first by becoming toroids with tails. At 60°C, the bulk of the material is present as long fibers. At 80°C the fibers become a mixture of short fibers and small spheres. When the fibers were cooled, the toroidal morphology reformed, indicating that the process is reversible. However, a different mechanism occurs upon cooling than that of the initial formation of the toroids.

Progression of the transformation back to rod-like as the temperature increases.