A new hydrogel can incorporate high cell density constructs to better mimic the rearrangement of native tissue in bioengineering. 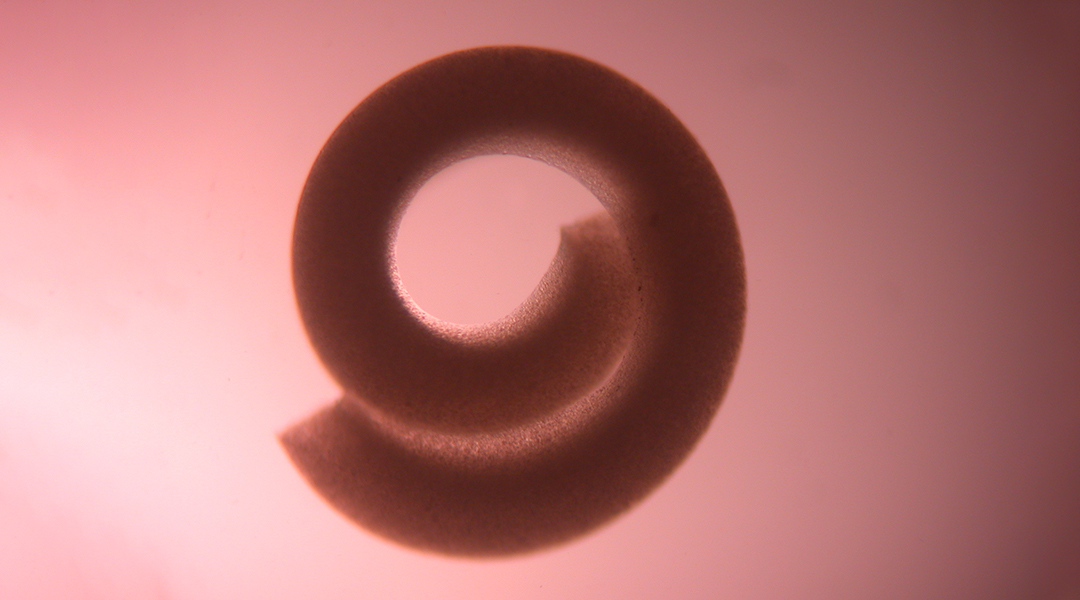 In another exciting development for the field of bioengineering, new 4D-shape-shifting materials developed by researchers at the University of Chicago Illinois could be the next breakthrough in tissue healing.

4D materials are those that undergo controlled changes in geometry over time in response to specific stimuli. As a result of their dynamic nature they show promise in mimicking the controlled reorganization of developing and healing tissues while also synchronizing with their surroundings for better integration.

“Many tissues of the human body undergo dynamic changes in shape during development and healing,” said the study’s lead author Eben Alsberg, professor of biomedical engineering. “4D materials could be valuable in tissue engineering strategies as they might be able to induce or partially mimic these geometric changes to enhance the formation of functional tissues with complex architectures.”

Traditionally, tissue engineering techniques have involved stable structures built from polymers. Imagine a scaffold built in the shape of an ear and seeded with cells capable of producing cartilage and skin tissue, eventually becoming a transplantable ear. While this would be a medical marvel in itself, this strategy has its limitations due to the static nature of these artificial structures.

“Most conventional 3D‐engineered tissues maintain a defined shape during their formation and may not be able to actively interact in coordination with the changes occurring in surrounding developing or healing tissues,” wrote the authors in their paper. “In this respect, the ability to induce defined 4D geometric changes in compatible materials may endow engineered tissues with the capacity to dynamically change their shape in concert with those of neighboring tissues.”

4D materials have been a target for bioengineers for some time, however, most are not biodegradable or completely compatible with cells. But this is where the current study differs.

In their paper recently published in Advanced Functional Materials, the team reports a new 4D biomaterial platform “endowed with the capacity to undergo tailored geometric changes over time while simultaneously permitting the incorporation of high densities of cells with maintained viability and functionality.”

The innovative new material can change it’s shape in response to water exposure. In addition, it’s compatible with cell loading and is biodegradable, making it an excellent candidate to advance tissue engineering.

The hydrogel is composed of highly regulated patterns of two crosslinked polymers (oxidized and methacrylated alginate (OMA) and methacrylated gelatin (GelMA)) in which the differences in the two materials’ “swelling rates” drives controlled structural changes. The researchers also found that the higher the polymer concentration and crosslinking, the less and more slowly a given hydrogel will absorb water to induce a change in shape.

“We achieved morphological changes in hydrogel structure by adhering two materials that swell at different rates and/or to different extents under cell culture conditions,” said Alsberg. “In this case, alginate and gelatin were methacrylated to enable photocrosslinking, and the alginate was oxidized to varying degrees to regulate its swelling and degradability.”

The different hydrogels can also be layered on top of one another like a stack of paper, and the differences in their ability to absorb water is what results in the hydrogel bending and twisting into “C” shapes. These tubular shapes resemble structures like blood vessels and other tubular organs, which also open doors for the development of artificial tissue models for drug screening.

The hydrogel was then embedded with bone marrow stem cells at very high density. “Both polymer hydrogels support encapsulation of cells at a concentration of at least 100 million cells/mL and culture in growth or differentiation media with high viability,” added Yu Bin Lee, a biomedical engineering postdoctoral researcher and first author on the paper.

This is the highest density of cells ever recorded for 4D materials and was sustained for a significant period of time, demonstrating how the shape-changing, cell-laden hydrogel could be induced to become bone- and cartilage-like tissues.

“Using our bilayer hydrogels, we can not only control how much bending the material undergoes and its temporal progression, but because the hydrogels can support high cell densities, they more closely mimic how many tissues form or heal naturally,” said Lee. “This system holds promise for tissue engineering, but may also be used to study the biological processes involved in early development.”