Is semiconductor photocatalysis photochemical or thermochemical or both? (and do we care?)

Professor Ozin addresses a fundamental concern in the field of photocatalysis. 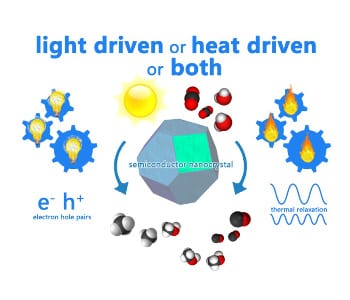 This question is just as applicable today, even after the publication of more than 17,000 papers on semiconductor-based organic photooxidation, water photolysis and carbon dioxide photoreduction reactions.

Figure 1. Gas-Phase Photocatalysis: powered by light, heat or a combination of both? Graphical illustration courtesy of Dr. Paul O’Brien.

An equally important question relevant today, especially in the rapidly emerging field of solar fuels and solar chemicals, is what proportion of a claimed gas-phase photocatalytic reaction is light driven, heat powered or a combination of both?

This important issue is encapsulated in Figure 1 which illustrates light driven versus heat driven contributions to these ‘light-assisted’ heterogeneous catalytic processes. On the left side of Figure 1, excited charge carriers interact with adsorbed surface species to enhance reaction rates. On the right side of Figure 1, excited charge carriers thermally equilibrate through phonon relaxation and supply heat energy to enhance reaction rates. The questions are which of these processes dominate and what their contributions are?

This discussion is especially pertinent for the case of gas-phase photocatalysis where conduction and convection heat losses are expected to be small compared to the aqueous phase analogue.

The efficiency of most photocatalytic reactions will increase with the intensity of the light and the number of photogenerated electron-hole pairs. This implies the requirement of strong absorption of light by the photocatalyst. Subsequently, photoexcitation at energies higher than the electronic band-gap will result in heating of the photocatalyst from rapid phonon relaxation, with an accompanying increase in the local temperature. Excitation below the energy of the band-gap should have no effect unless sub-gap defect states abound. This is likely the scenario operating in reported research of gas-phase CO2 photoreduction on ‘black’ catalysts, exemplified by Ru-RuOx and Ni-NiOx nanomaterials, which begs the question whether they are light powered or heat driven or both?

An especially pressing question is how to decide on the best way to go scientifically, technologically and economically in the production of solar fuels and solar chemicals using greenhouse gas (CO2) as the feedstock. This is particularly urgent as we are currently in the midst of an intense international effort to develop technologies capable of converting CO2 into a fuel or a chemical. Discovering materials able to positively improve this process on a large scale, driven thermochemically and/or photochemically, is a critical step towards ameliorating greenhouse gas emissions and enabling a carbon-neutral, renewable energy, sustainable economy.

In current industry practice there are many catalysts and processes known for making fuels and chemicals from gaseous CO2 some of which are shown below:

Methane can power electricity-generating stations and provide heating for buildings. Methanol can drive fuel cells, run automobiles and act as a precursor for ~30% of industrial chemicals. Lastly, carbon monoxide can be used as a precursor for making hydrogen, methanol and liquid hydrocarbons according to the reactions:

The energy required to drive these processes is dominated by fossil fuels. However, increasing amounts of renewable energy, from wind and solar, tidal and hydroelectric, nuclear and geothermal are coming on stream to minimize the depletion of legacy resources and cut back on associated carbon dioxide emissions.

The idea of utilizing power from the sun to make electricity has a long history in the annals of solar cells whereas the vision of making solar fuels and chemicals from the sun is of a more recent vintage. While great scientific and technological strides have been made over the past four decades towards the realization of a renewable energy resource from the photolysis of H2O to H2, the photocatalytic reduction of CO2 remains a significant challenge and has been studied to a much lesser extent. This is especially true for gas-phase CO2 photoreduction, which can be readily engineered into existing industry heterogeneous catalytic infrastructure and is increasingly being considered as the only practical way of scaling the process to sufficient proportions to have a significant impact on decreasing global greenhouse gas emissions. 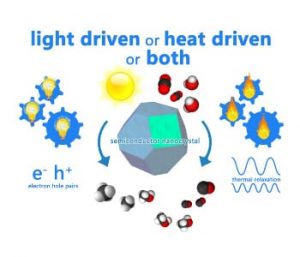 Figure 2. Is your photocatalytic reaction powered by light or heat or both? Graphical illustration courtesy of Chenxi Qian.

As the heterogeneous catalytic reactions listed above for converting CO2 to fuels and chemicals are thermally activated, the pursuit of using light and/or heat from the sun to drive these reactions has become an active area of research. In both cases, research has been aimed at the development of optimized photochemical or photothermal catalytic materials, photo-thermal reactors and solar-light concentrators.

While the construction of the most efficient reactors and concentrators are engineering obstacles, the ongoing process of discovery for the most active materials is a chemical challenge. Hence, deciding whether the chemical reactions are light driven, heat driven or both is an important issue, as illustrated in Figure 2. In this respect, experiments need to be devised that would permit the disentanglement of photochemical and thermochemical contributions to observed heterogeneous reaction rates and efficiencies. This can be done by monitoring the temperature, wavelength and intensity dependence of the reactions in the dark versus in the light.

It is worth noting photon to chemical conversion efficiency in principle can reach 10-20 % whereas thermal to chemical conversion efficiency is usually lower, so from this point of view photocatalysis is advantageous. Also exothermic reactions can be easily catalyzed thermally whereas for endothermic ones catalysis by light can be an efficient way to supply the energy needed to drive the reaction.

The heat is now on the implementation of a new CO2 economy for the production of solar fuels and solar chemicals using light from the sun!