Season the soup: the important role of salt additives

The synthesis of methacrylic zwitterionic, thermoresponsive and hydrophilic (co)polymers via copper-mediated polymerization is described. 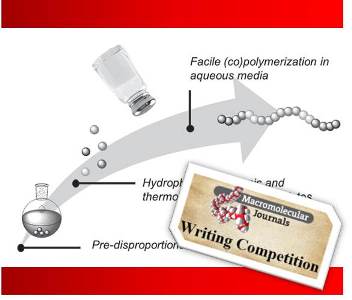 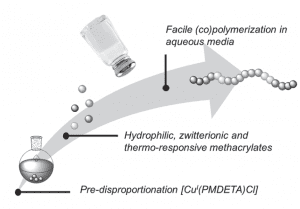 The highlighted article from Haddleton and coworkers describes a synthetic strategy for the synthesis of methacrylic zwitterionic, thermoresponsive and hydrophilic (co)polymers via copper-mediated polymerization within short time. The synthesis of zwitterionic polymers via controlled living polymerization needs to be studied more extensively, because these polymers have a high potential for bioapplications due to their antifouling properties. The key steps for these well-designed methacrylic polymers relies on the predisproportionation of an in situ formed metal-ligand complex like [CuI(PMDETA)Cl] as well as the addition of supplementary halide salts, e.g. NaCl. The copper catalyst allows good control over the polymerization for low and medium conversions, but a MWD broadening is still visible for high conversions of the monomer. The addition of a halide salt source narrows down the MWD as low as Ð = 1.3 for poly[poly(ethylene glycol)methyl ether methacrylate] (PEGMA475) by reducing the extent of complex dissociation. The halide salt should contain the same halogen as the Cu-complex to avoid unsatisfactory halogen-exchange. Metal-ligand catalyzed polymerizations retain the end-group fidelity even for block copolymers of acrylamides and (meth)acrylates at high conversions without additional purification steps. In aqueous media low dispersities (1.05 < Ð < 1.38) at quantitative conversions can be achieved.

In their recently published article, Simula et al. investigate controlled polymerizations at quantitative conversions (>99%) for a wider range of monomers like functional methacrylates and zwitterionic monomers. The optimization of the synthesis relies on two crucial points: the ratio of initiator (I) to ligand (L) to Copper(I) halide (CuIX) and the halide salt concentration. For a defined ratio of I:L:CuIX applies the general rule: the higher the salt concentration, the lower the dispersity (Ð) of the polymer for the same degree of polymerization. As a consequence, very short polymerization times from 30 minutes for high molecular weight PEGMA (up to Mn ≈ 60 000 g*mol-1) to 2.5 h for functional telechelic polymers were sufficient.