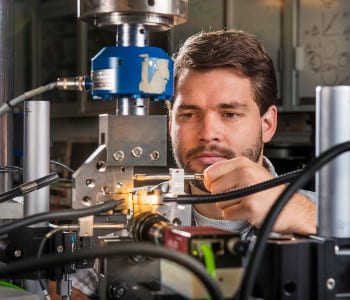 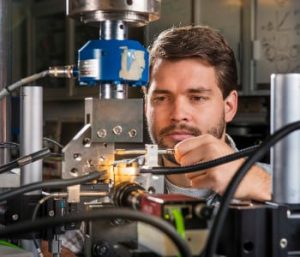 Humans have used metals for thousands of years, but there’s still a lot about them that isn’t fully understood. Just how much stretching, bending or compression a particular metal will take is determined by mechanical properties that can vary widely, even within parts made of the same material.

Sandia National Laboratories is working to fill gaps in the fundamental understanding of materials science through an ambitious long-term, multidisciplinary project called Predicting Performance Margins, or PPM. From the atomic level to full-scale components, the research links variability in materials’ atomic configurations and microstructures with how actual parts perform.

PPM aims to identify how material variability affects performance margins for an engineering component or machine part. The goal is a science-based foundation for materials design and analysis — predicting how a material will perform in specific applications and how it might fail compared with its requirements, then using that knowledge to design high-reliability components and systems. Materials are such things as alloys, polymers or composites; components are switches, engines or aircraft wings, for example, while systems can be entire airplanes, appliances or even bridges.

The PPM approach has become a prototype for tackling other difficult materials issues. Materials science researchers recently used the approach in a proposal to understand brittle materials, establishing a multidisciplinary project to develop the fundamental science while delivering improvements during the project to those who use these materials. That way, users don’t have to wait years to reap benefits from the fundamental work. Future studies that could benefit from the approach include the aging of polymers and foams, friction between electrical contacts and failures in glass-to-metal seals and in solders and interconnects.

“Too often, we are unable to predict precisely how a material will behave, and instead we must rely on expensive performance tests,” said program manager Amy Sun. “Capturing variability by testing alone is too expensive and not predictive.”

PPM simultaneously tackles fundamental materials science issues at the atomic and microstructural scales and engineering problems at the visible scale.

Success requires connecting the two extremes. “The research focuses on where the scales connect — where the atomistic level and a single crystal intersect and where the crystal level and the component level intersect — to predict collective behavior,” said lead investigator Brad Boyce.

Researchers examine how and why metals deform so they can predict that behavior and ultimately make metals stronger. Better understanding could lead both to better materials and improvements in processing materials. “It’s one thing to predict failure. It’s another to make metals better so they don’t fail,” Boyce said.

Sandia’s core mission of nuclear weapons stewardship and national security requires it to meet the highest standards. “Few places in the world are asked to guarantee lifetime performance of complex engineering systems,” Sun said. But at Sandia, “we have to put a label on, ‘Best used by,’ and when we do, what are the scientific data that back our claims? We have to support our results with sound, quantitative evidence.”

From the bottom up, the program studies how atoms undergo rearrangement that initiates defects in response to mechanical stresses and strains (nanoscale); how these crystalline defects evolve, multiply and interact (mesoscale); and finally, how an ensemble of polycrystals works in concert to govern deformation and failure of a component (macroscale).

Researchers use such advanced characterization techniques as 3-D microscopy and focused ion beam and digital image correlation, as well as quantum and atomistic simulations and mesoscale material mechanics.

At the top end, PPM looks at how manufacturing processes determine the microstructure of a material and examines test data and failure statistics to better understand the relationship between microstructures and how engineering materials perform.

One pilot study involves laser welds, which are used widely in engineered systems. Weld performance can be unpredictable because a weld’s microstructure isn’t homogenous and geometric imperfections such as cracks and pores can be introduced in the welding process. The aim is to understand a basic engineering question: how the microscopic variability of a weld impacts the mechanical reliability of a welded component.

“We could say, ‘If you weld it with this margin of overdesign, you’re probably OK, you’re probably safe.’” Sun said. “But as a materials scientist, you’re not going to be happy with that answer.”

Instead, material scientists and system designers want to predict the effects of porosity on such weld properties as strength, ductility and toughness. “How do these little microscopic pores or any kind of imperfections in your microstructure affect the actual material properties?” Sun asked. “How do we measure that? What is that fundamental mechanism for the pore to start failing?”

PPM studies pure metals such as tantalum or iron. Knowing how atoms in crystals interact allows researchers to calculate inter-atomic forces. The calculations are used to predict how single crystals of the metal will respond to external stresses, and in turn, the how engineering materials, such as aggregates of small single crystal grains will perform. While it’s not possible to model every atom in engineering-scale codes, “if you understand the atomistic effects well, you can approximate it very accurately in the high-level codes,” said Rick McCormick, a senior manager in radiation, nano- and optical sciences.

Researchers use such tools as transmission electron microscopy to view individual atoms while bending and breaking tiny components or parts. “They can see what’s happening to these grains and these boundaries, how the stresses build up. They can see it at a microscale, where they’re looking at aggregates of grains,” McCormick said.

Then they scale up, running experiments on bigger components at Sandia’s large engineering science test facilities.

When PPM began in 2010, it didn’t take long to assemble a core multidisciplinary team of about 20 staff members and postdocs augmented by a large network of people doing interrelated projects, the “friends of PPM.”

“Everyone wanted to work on this problem,” Sun said. “It was so interesting and relevant to pretty much everything we do.”

PPM has already had an impact. On the engineering side, nuclear weapons programs are using PPM expertise to help component engineers understand how to better design and qualify structural components and modify material processes such as recrystallization to achieve required performance. In fundamental science, 20 PPM articles have been published in peer-reviewed scientific journals. PPM team members have given more than 100 presentations and international conferences have had sessions on PPM-related topics.