Directional motion and transport can be achieved using a salt concentration gradient and an appropriately designed self‐assembling system, without substantial synthetic effort or a matrix. 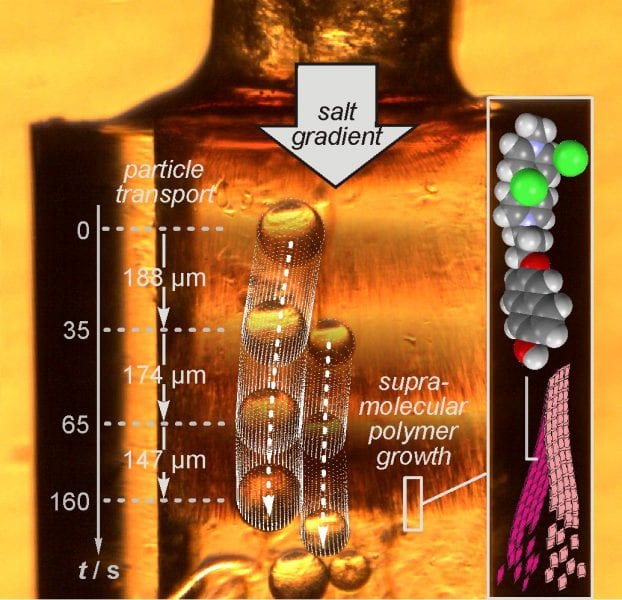 Most concepts aimed at achieving directional motion at the molecular level use molecular switches and machines incorporated in or on a matrix such as surfaces, particles, liquid crystals, gels, or polymers, which provide the order required for concerted action of the molecular machines. Sophisticated synthetic effort is often also required to prepare the molecular machines. Michael Gradzielski and colleagues from the TU Berlin and FU Berlin, Germany report in Advanced Materials that directional motion and transport can be achieved using a salt concentration gradient and an appropriately designed self‐assembling system, without substantial synthetic effort or a matrix.

The researchers show that in water solutions of the structurally very simple CAMCl2 monomer (shown to the left) flexible, partially amorphous ribbons form above a critical concentration in the absence of salt, NaCl, but when NaCl is added it strongly induces the formation of mechanically rigid and straight rods, which then contain fully crystallized CAMCl2.

With salt gradients defining the direction, the mechanical work generated from the crystallization process under these non-equilibrium conditions during the supramolecular polymerization can be used to push 100 μm‐sized particles forward over distances of hundreds of micrometers or even millimeters (shown below). It is a continuous process, which follows the moving salt gradient and—once the salt gradient is established—proceeds autonomously until the salt gradient has leveled out.

Using the gradient-directed supramolecular polymerization for directional transport. a) Optical microscope images (25×) showing the directional transport of the Sephadex particles by the rods growing inside a glass capillary (1.93 × 10−2 m CAMCl2 in water), when a NaCl crystal of (400 µm)3 size is added on the left side of the capillary. The black arrows indicate a capillary scratch which can be used as a reference to follow particle motion. Two of the three moving particles are marked by dotted lines. b) The same experiment repeated with a larger number of particles which are efficiently shifted, even when resistance increases through particle collisions. c) The experiment repeated in the absence of CAMCl2 in order to rule out osmophoresis as an alternative source of motion. No particle movement is observed in a NaCl gradient without simultaneous CAMCl2 rod assembly. d) “Catapult-like” mechanism of transport: The particle marked in red is pushed forward by the fiber marked in red, which stiffens during the NaCl-induced rod formation process (end position of both indicated by the arrows). A second fiber (blue) shifts the same particle (blue) forward again. Nonmoving particles (yellow) serve as spatial reference. The colors of the images have been altered to enhance contrast to make the single fibers more easily visible.