Regnase-1 is critical for the degradation of mRNAs involved in immune responses as well as other various biological processes. 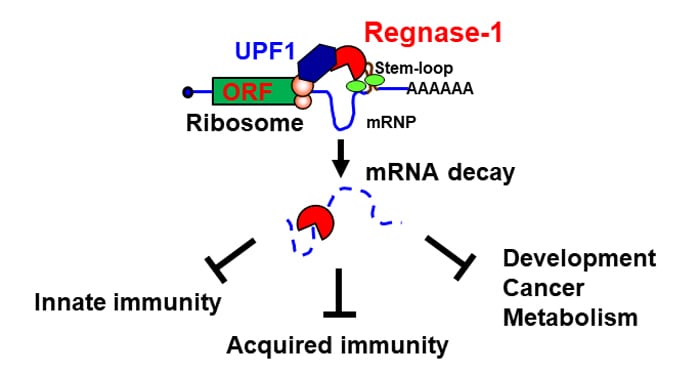 Immune responses are mediated by the activation of immune cells, which can be caused by various factors, such as microbial infection, tissue injury and cellular stress. The activation of immune cells is controlled at both transcriptional and post-transcriptional levels. Post-transcriptional regulation modifies mRNA stability and translation, allowing for elaborate control of proteins required for immune responses and inflammation, such as proinflammatory cytokines, prostaglandin synthases, cell surface co-stimulatory molecules and even transcriptional modifiers. Such regulation is important for coordinating the initiation and resolution of inflammation, and is mediated by a set of RNA binding proteins (RBPs), including Regnase-1, Roquin, Tristetraprolin and AUF1.

Among these, Regnase-1, also known as MCPIP1, is a member of recently emerging endoribonuclease family. As discussed in a review article in WIREs RNA, Regnase-1 and its family members are expressed in innate and adaptive immune cells, and are found be critical for the degradation of mRNAs involved in immune responses.

Regnase-1 specifically recognizes stem-loop structures present in 3’ untranslated regions of cytokine mRNAs, and directly degrades the mRNAs in a translation- and UPF1 helicase-dependent manner that is reminiscent of nonsense-mediated decay. Regnase-1 regulates the activation of innate and acquired immune cells, and is critical for maintaining immune homeostasis as well as preventing over-activation of the immune system under inflammatory conditions. On the other hand, other RBPs Roquin and Tristetraprolin trigger exonucleolytic degradation of mRNAs by recruiting the CCR4-NOT deadenylase complex, indicating that Regnase-1-mediated mRNA decay is unique in the regulation of immune reactions.

Furthermore, recent studies have revealed that Regnase-1 and its family members are involved not only in immunity, but also in various biological processes, such as control of virus infection, cancer progression, development, and fat and iron metabolisms. Thus, Regnase-1-mediated mRNA decay is essential for the elaborate regulation of immune responses as well as other various biological processes.