The Role of Nanointerfaces in Hydrogen Storage 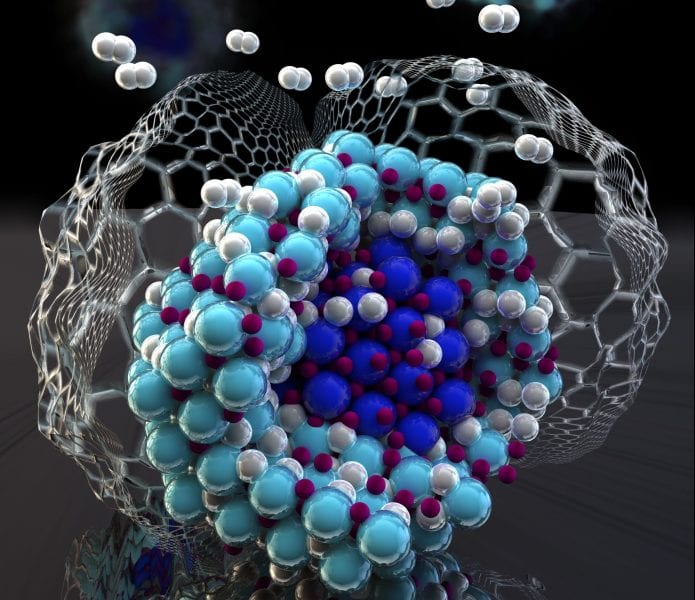 Hydrogen is an ideal energy carrier which can be directly used, for example, as a fuel for hydrogen powered vehicles or to generate electricity. However, the need for practical hydrogen storage systems remains one of the key technical challenges. In this context, hydrogen storage in lightweight solid-state materials has been widely investigated but it has proven difficult to find a material that stores hydrogen reversibly with fast hydrogen release and uptake kinetics at moderate temperatures. 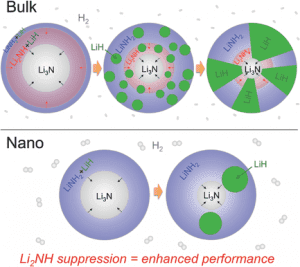 Bulk α-Li3N, which hydrogenates to [LiNH2 + 2LiH] via a two-step reaction pathway via the intermediate [Li2NH + LiH], is known for its hydrogen-storage performance. Furthermore, it has been demonstrated that the hydrogen storage viability of complex metal hydrides can be drastically improved by restricting the metal hydride dimension to the nanoscale, also known as nanoconﬁnement. This strategy can lead to significantly enhanced kinetics and hydrogen storage performance due to the shortened H2 and ionic diffusion paths. Equally important is the role of internal interfaces in these nanoconfined hydrides as nucleation of intermediate phases can severely limit the kinetics of solid-state hydrogen storage reactions in complex metal hydrides.

In a combined experimental and theoretical approach, Brandon Wood and co-workers have shown how nanoconfinement in a Li3N/[LiNH2 + 2LiH] system can suppress intermediates. Here Li3N particles hydrogenate in a single reaction step to [LiNH2+2LiH]. The team of researchers investigated the equilibrium phase fractions of Li3N, Li2NH, LiNH2, and LiH for hydrogenation as a function of pressure for three different Li3N particle sizes. With decreasing particle size the pressure range for Li2NH stability narrows and the likelihood of Li2NH nucleation is negligible. Hydrogenation of 3.2 nm diameter particles results in an exact 2:1 LiH-to-LiNH2 ratio in the nanoconfined system, whereas conversion remains incomplete for the larger particles which clearly express Li2NH at intermediate stages in the reaction cycle.

These results highlight the significance of solid-solid interfaces and particle microstructure for understanding hydrogen-induced phase transitions in complex metal hydrides. Given the role of interfaces as an important factor for altering phase transformation pathways in the battery community this work paves the way for the application of some of the same strategies carried out in battery research to hydrogen storage.