A newly built biohybrid wing could lead to new drone designs, and reveals that wing folding is key to efficient flight. 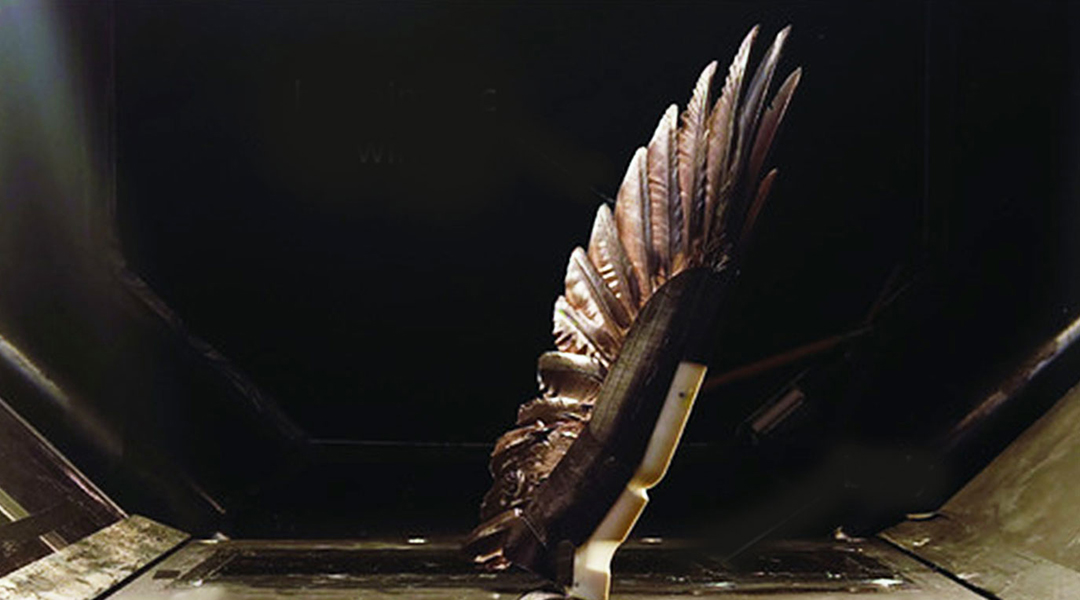 Our skies were full of flight long before planes, helicopters, and drones. Yet the rigid wings and spinning blades of man-made flying machines don’t much resemble nature’s wings.

One reason for this is that the elegant complexity of bird wings is so hard to understand, let alone replicate. Now, researchers have built a robotic wing, combining real feathers with mechanical structures, to ask fundamental questions of bird flight dynamics and possibly guide the development of a new generation of flapping drones.

Despite a long history of bird flight research, the complex movements, aerodynamics, and power requirements mean many questions remain unanswered.

The robotic wing detailed in an article in Advanced Intelligent Systems [https://doi.org/10.1002/aisy.202200148] overcomes these barriers to provide an unprecedented platform for investigation.

Previous such models have tended to mimic insect wings, with non-folding structures and high flapping frequencies, or simplify wing structure so far to be only a basic representation. This structure is equipped with real jackdaw flight feathers and articulated joints to allow simultaneous flapping, pitching, and folding.

“We have built a robot wing that can flap more like a bird than previous robots, but also flap in way that birds cannot do. By measuring the performance of the wing in our wind tunnel, we have studied how different ways of achieving the wing upstroke affect force and energy in flight,” said Christoffer Johansson, biology researcher at Lund University.

Observing the wing in a wind tunnel, the researchers investigated the aerodynamics effects of different wing movements, particularly focusing on the upstroke. They observed the wake caused by wing movement using particle image velocimetry, which visualizes the flow and movement of air.

“The new robotic wing can be used to answer questions about bird flight that would be impossible simply by observing flying birds,” explained Johansson. “Research into the flight ability of living birds is limited to the flapping movement that the bird actually uses.”

With this tool, they discovered that folding the wings during the upstroke helps birds fly more efficiently, as drag is reduced as the wing is raised, and uplift is maximized when it pulls down. They also discovered that tilting of the wing stroke is important to force generation — another subtlety that contributes to the millennia-old elegant efficiency of natural flight.

Investigating the mechanics and dynamics of flight can help us better understand bird movement, behaviour, and biology, which could be important for changing migration behaviour in response to climate change. But there’s a potential application in technology too.

Improvements in the design of drones are being constantly sought, in particular to improve efficiency and slow-speed flight. Flapping drones have long been considered, but never successfully realized.

“Flapping drones could be used for deliveries, but they would need to be efficient enough and able to lift the extra weight this entails,” concluded Johansson. “How the wings move is of great importance for performance, so this is where our research could come in handy.”

The team’s artificial wing is a step towards better understanding of flapping wing dynamics, though it may be a little while before flapping drones take flight.