Swiss researchers have used polymer actuators to create a two-fingered robotic gripper that can pick up objects of arbitrary shape, weight or deformability. 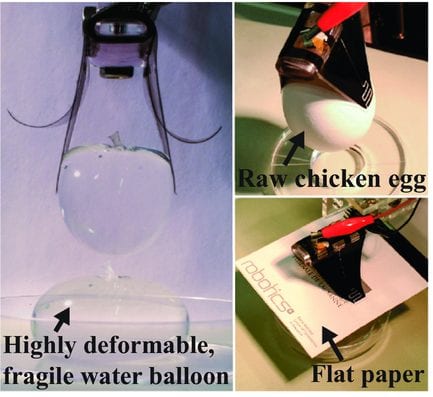 We as human beings can simply use our hands to pick up an enormous variety of objects: a fragile egg, a deformable balloon, a flat business card. However, achieving such versatile and adaptive grasping with robotic grippers is not trivial, and usually requires complex sensing, motor accuracy, modeling and learning. 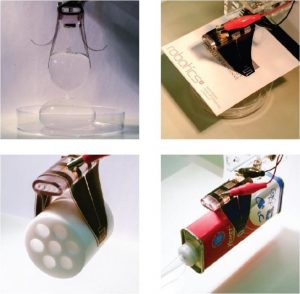 A research team at the École Polytechnique Fédérale in Lausanne led by professor Herbert Shea now has demonstrated a soft, conformable and lightweight robotic gripper based on electromechanically active polymers. Their design is capable of picking up a wide range of objects while simultaneously sensing its own deformation. As shown in the images, the two-fingered gripper – weighing only 1.5 g – can pick up solid items such as a Teflon cylinder and an oil can, but also deformable and fragile items such as a flat sheet of paper (1 g), a water-filled balloon (36 g), and even a raw chicken egg (61 g). 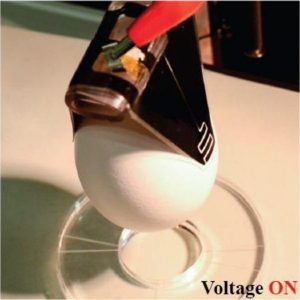 The robotic gripper picking up a water balloon with a scheme clarifying the electroadhesion force responsible for it.

Full results and additional information are presented in the authors’ publication in Advanced Materials.