A multinational team lead by the University of Oxford has discovered a novel topological insulator in the form of Sb-doped Bi2Se3 nanowires. 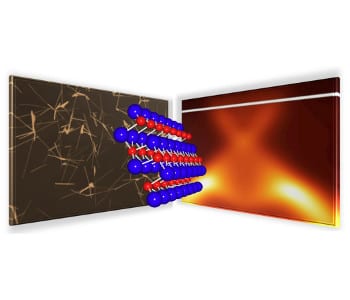 Topological insulators (TIs) hold the promise to revolutionize electronic devices through low-power consumption and spin-dependent electron transport. The topological surface state is unique to materials with a particular symmetry of the band structure and is characterized by spin-dependent metallic conduction while the bulk of the material is insulating. It does not suffer from backscattering and therefore shows dramatically increased conductivities. A small number of materials have been identified to host topological surface states. One of the most prominent examples is Bi2Se3 – a material composed of two-dimensional layer stacks. Bi2Se3 comes with a disadvantage that is challenging to overcome: the high bulk carrier concentration due to Se vacancies masks the spin-dependent transport of the topological surface state.

Topological insulators not only offer new perspectives for technology but also for fundamental physics research. Exotic particles such as Majorana fermions are predicted to emerge in topological insulators in contact with a superconductor and magnetic monopoles are expected to exist as well. In short, topological insulators are a new type of quantum material with an exciting potential that we have just started to explore, let alone understand.

A multinational team lead by the University of Oxford in collaboration with Diamond Light Source, the Free University in Berlin, and the USTC in Hefei has discovered a novel topological insulator in the form of Sb-doped Bi2Se3 nanowires. In contrast to pure Bi2Se3 the new TI is not layered but consists of quasi one-dimensional atomic ribbons, characteristic for its crystal structure. The surface state is easily accessible without being masked by bulk carriers. The nanowires were synthesized with very high yield by chemical vapor deposition using a special catalyst recently introduced by the Oxford group. The main achievement of this work was to understand the formation of the new structure, to explain its origin, and to demonstrate the TI properties by angle-resolved photoemission spectroscopy. The result not only adds to the list of three-dimensional topological insulators but will also spark further experimental and theoretical studies.