Researchers from North Carolina State University have created conductive wires that can be stretched up to eight times their original length while still functioning. 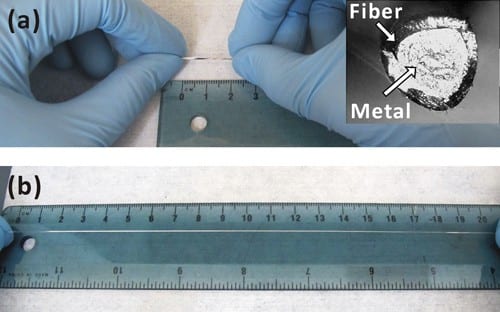 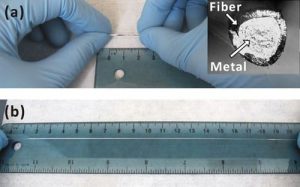 The tube, filled with liquid metal, can be stretched many times its original length.

Researchers from North Carolina State University have created conductive wires that can be stretched up to eight times their original length while still functioning. The wires can be used for everything from headphones to phone chargers, and hold potential for use in electronic textiles.

To make the wires, researchers start with a thin tube made of an extremely elastic polymer and then fill the tube with a liquid metal alloy of gallium and indium, which is an efficient conductor of electricity.

“Previous efforts to create stretchable wires focus on embedding metals or other electrical conductors in elastic polymers, but that creates a trade-off,” says Michael Dickey, an assistant professor of chemical and biomolecular engineering at NC State and co-author of a paper on the research.

“Increasing the amount of metal improves the conductivity of the composite, but diminishes its elasticity,” Dickey says. “Our approach keeps the materials separate, so you have maximum conductivity without impairing elasticity. In short, our wires are orders of magnitude more stretchable than the most conductive wires, and at least an order of magnitude more conductive than the most stretchable wires currently in the literature.”

While the manufacturing of the new wires is relatively straightforward, Dickey notes that one challenge needs to be addressed before the wires can be considered for popular products: how to minimize leakage of the metal if the wires are severed.