Fraunhofer researchers have developed load bearing, biodegradable implants that are completely degraded in the body. 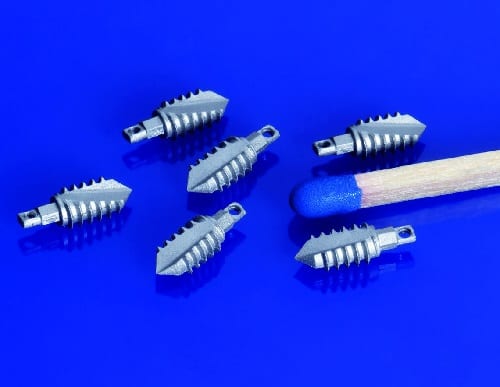 Surgeons fasten cracks using suture anchors. Such implants used to be made of titanium or non-degradable polymers – but these either remain in the body even after healing or surgeons have to remove them in a second procedure.

To avoid this, researchers at the Fraunhofer Institute for Manufacturing Technology and Advanced Materials IFAM in Bremen, Germany, have developed load bearing, biodegradable implants that are completely degraded in the body. In the first step, they have used powder injection molding to manufacture a suture anchor. 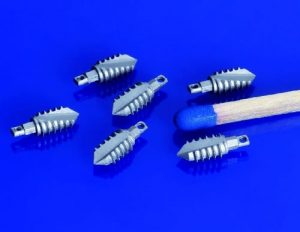 Suture anchor made of iron-tricalcium phosphate (FE-TCP) only slightly larger than a match head. © Fraunhofer IFAM

“With the implant, severed tendons can be anchored to the bone until they have grown again. Since the function of the fixing element is satisfied after the healing process, it is no longer needed in the body. If implants or protheses that are as wear resistant as possible are required – such as in an artificial hip joint – metallic alloys such as titanium will certainly continue to be used. However, for plates, screws, pins and nails which should not remain in the body, there are other requirements,” says Dr. Philipp Imgrund, manager of the Medical Technology and Life Sciences business field at IFAM.

In the project “DegraLast”, IFAM has worked jointly with the Fraunhofer Institutes for Laser Technology ILT, for Biomedical Engineering IBMT and for Interfacial Engineering and Biotechnology IGB in establishing a materials and technology platform to produce degradable bone implants for use in trauma surgery and orthopedics.

These materials are to be gradually absorbed by the body while, at the same time, new bone tissue is formed. Ideally, the degree of degradation is adapted to the bone growth so that the degradation of the implant meshes with the bone formation. For this reason, the scientists are developing materials with specifically adjustable degradation. The challenge: The implants have to be mechanically stable enough during the entire healing process so that they are able to fix the bone in place.

The researchers at IFAM are relying on metal-ceramic composites. A metal component based on an iron alloy is being combined with beta-tricalcium phosphate (TCP) as the ceramic component. “Iron alloys corrode slowly and ensure high mechanical strength, while ceramic decomposes quickly, stimulates bone growth and aids the ingrowth of the implant”, Imgrund says to explain the advantages of this material combination.

In laboratory experiments, the researchers have found the optimum composition of the materials for the suture anchor. The demonstrator consists of 60% iron and 40% ceramic. The researchers have succeeded in doubling the degradation rate from 120 to 240 µm per year in the laboratory model. The shoulder anchor would be absorbed by the body within one to two years.