Research Adventures and Challenges in Korea 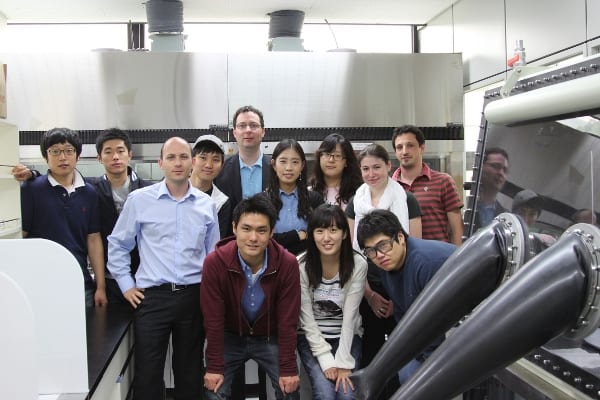 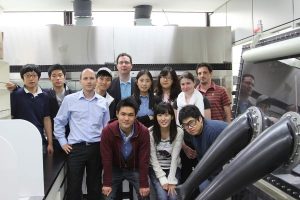 Dr. Nicola Pinna (second from right) and Dr. Patrick Theato (middle) with their co-workers during their stay in Korea.

In the past, Korea used to be called as “Land of the morning calm”, however, when arriving in Korea nowadays, one is faced with the fact that life here follows more the modern slogan of “Dynamic Korea”. Rapid progress and changes can be seen in every sense, which are most obviously visible in traffic on the roads, but also in the way construction takes place within Seoul. Never to stand still and constant development to progress further seems to be in the heart of every Korean. As such, also Korean research is hungry to achieve even more. For this purpose, Korea launched the World Class University (WCU) Programs, a Korean initiative that were established among several top-level universities in Korea in 2008 in order to foster the internationalization of Korean research and education.

Being fascinated by Korea already since several years, we felt honored and thrilled to be chosen to participate in one of these WCU Programs. The excitement is due to several reasons. First, the envisioned research projects on Chemical Convergence for Energy and Environment (C2E2) are designed to foster research in newly developing fields of energy and environmental applications of nanomaterials. Second, the advanced electronic technology in Korea can provide a fast and easy access to the application and realization of our scientific outcome. Therefore, altogether four foreign professors have joined with seven Korean faculties to form what we call meanwhile “our WCU program”. Among those, two young European scientists share their research life as well as their actual laboratory in Korea. Reflecting on the status of the program after being established for the first year, we are motivated to report on “our WCU program”.

From day one on, we have been faced with different challenges. First of all, bridging two jobs in two different continents requires a particular management plan. The time difference of eight hours between Europe and Korea provides the possibility to handle the Korean business from 8 to 16 o’clock and then the business back at home from 16 to 24 o’clock. Obviously, this represents two working days combined into one. Next, even though Korea is a very dynamic country, there exists a serious bureaucracy. In combination with our limited skills in Korean language this can be a very demanding challenge to deal with. Nevertheless, thanks to the endless support from our secretaries, most of the obstacles could be solved. However, as one could imagine, we felt sometimes very uncomfortable about not being able to handle certain situations ourselves. But of course, at the same time we learned that almost everything seems to be possible, if one is willing to accept the particular challenges.

Besides the technological advances in Korea, most impressive is the respect students show towards their professors. This originates from a long history of Confucianism, which Korean tradition and culture have been based upon for more than 600 years. Modesty and the respect towards elderly and teachers are prevalent in the society. This is of course a mixed blessing. On one hand, it enables a strong working force, however, on the other hand it may limit to be proactive and creative. To find the right balance is another challenge. In addition, teaching a class in Korea is another “adventure”. In contrast to what one could imagine, this is not due to a language barrier, but mainly because the teaching programs between Korea and Europe are significantly different. For example, undergraduate research works in the lab are relatively less emphasized in Korean curriculum. This difference must be manifested due to the fact that our courses are part of engineering curriculum for diverse engineering students, who are different from our own discipline, chemistry. Moreover, since Korean students are not used to our European teaching methodology, we had to rapidly adapt but, at the same time, try to balance the very different backgrounds of students in our courses.

But every challenge provides incredible opportunities. In the forefront, we have to mention the possibility for joint interdisciplinary and international research. It is a very exciting adventure for two synthetic chemists specialized in new materials and nanostructures to be embedded in an engineering environment. This setup provides stimulating research possibilities that enable projects ranging from pure synthesis to real applications within one framework. As a matter of fact, many of the Korean faculty members of our program are interested in testing our nano-objects in various and disparate applications ranging from lithium ion batteries or supercapacitors to their environmental impact. Most of all, the WCU program gives us the opportunities to tie long lasting knots with new colleagues from different countries and research areas. And these new friendships will surely outlive the WCU program itself.

Finally, we strongly believe that this program is a great experience and opportunities not only for us, but especially for the students participating in the WCU program. It provides them the opportunities to (i) work with foreign scientists in a Korean research environment, (ii) have the possibility to spend some time of their master/PhD thesis abroad in the laboratory of the advising foreign scholar and (iii) interact with foreign students who are spending some of their research time in Korea. So, the WCU program can be seen as a tool to bring two scientific and cultural worlds together.

All in all, WCU is a great idea and it looks very promising. However, as there are several factors that can influence the outcome of the program, only the coming years will show if these challenges and expectations will be met and turn not only “our WCU” but the WCU program in general into the anticipated success story. We are thrilled to be an active part of it.