A combination of nanotechnology and a unique twisting property of light could lead to new methods for ensuring the purity and safety of pharmaceuticals. 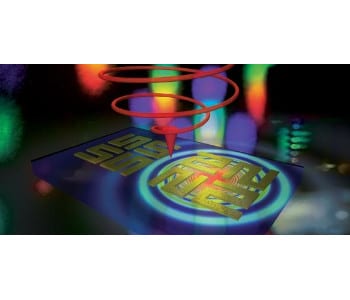 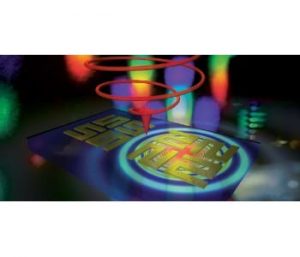 A combination of nanotechnology and a unique twisting property of light could lead to new methods for ensuring the purity and safety of pharmaceuticals.

A direct relationship between the way in which light is twisted by nanoscale structures and the nonlinear way in which it interacts with matter could be used to ensure greater purity for pharmaceuticals, allowing for ‘evil twins’ of drugs to be identified with much greater sensitivity.

Researchers from the University of Cambridge have used this relationship, in combination with powerful lasers and nanopatterned gold surfaces, to propose a sensing mechanism that could be used to identify the right-handed and left-handed versions of molecules.

Some molecules are symmetrical, so their mirror image is an exact copy. However, most molecules in nature have a mirror image that differs – try putting a left-handed glove on to your right hand and you’ll see that your hands are not transposable one onto the other. Molecules whose mirror-images display this sort of “handedness” are known as chiral.

The chirality of a molecule affects how it interacts with its surroundings, and different chiral forms of the same molecule can have completely different effects. Perhaps the best-known instance of this is Thalidomide, which was prescribed to pregnant women in the 1950s and 1960s. One chiral form of Thalidomide worked as an effective treatment for morning sickness in early pregnancy, while the other form, like an ‘evil twin’, prevented proper growth of the foetus. The drug that was prescribed to patients however, was a mix of both forms, resulting in more than 10,000 children worldwide being born with serious birth defects, such as shortened or missing limbs.

Researchers from the University of Cambridge have designed a new type of sensing mechanism, combining a unique twisting property of light with frequency doubling to identify different chiral forms of molecules with extremely high sensitivity, which could be useful in the development of new drugs. The results are published in the journal Advanced Materials.

The sensing mechanism, designed by Dr Ventsislav Valev and Professor Jeremy Baumberg from the Cavendish Laboratory, in collaboration with colleagues from the UK and abroad, uses a nanopatterned gold surface in combination with powerful lasers.

Currently, differing chiral forms of molecules are detected by using beams of polarised light. The way in which the light is twisted by the molecules results in chiroptical effects, which are typically very weak. By using powerful lasers however, second harmonic generation (SHG) chiroptical effects emerge, which are typically three orders of magnitude stronger. SHG is a quantum mechanical process whereby two red photons can be annihilated to create a blue photon, creating blue light from red.

Recently, another major step towards increasing chiroptical effects came from the development of superchiral light – a super twisty form of light.

The researchers also used tiny gold structures, known as plasmonic nanostructures, to focus the beams of light. Just as a glass lens can be used to focus sunlight to a certain spot, these plasmonic nanostructures concentrate incoming light into hotspots on their surface, where the optical fields become huge. Due to the presence of optical field variations, it is in these hotspots that superchiral light and SHG combine their effects.

“By using nanostructures, lasers and this unique twisting property of light, we could selectively destroy the unwanted form of the molecule, while leaving the desired form unaffected,” said Dr Valev. “Together, these technologies could help ensure that new drugs are safe and pure.”