Scientists at the Vienna University of Technology create organic materials with remarkable properties under conditions of extreme heat and pressure. 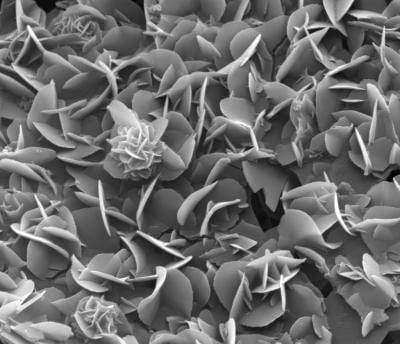 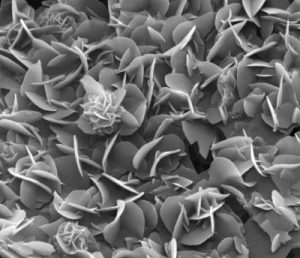 These “microflowers” are made of PPPI, the world’s most mechanically stable organic polymer. The blossoms are approximately five microns wide. Image: TU Vienna.

The earth’s crust works like a pressure cooker. Minerals typically do not form under standard conditions, but at high temperatures and pressures. However, an environment of extreme heat and pressure has been considered to be absolutely unsuitable for organic molecules. Scientists at Vienna University of Technology found out that under such seemingly hostile conditions, organic materials with remarkable material properties can be synthesized – for instance Kevlar, an extremely versatile high-performance material. The new technique has now been published in the journal Polymer Chemistry.

Steam Instead of Toxins

It seems counterintuitive: one might expect large, complex organic molecules to be destroyed by heat and high pressure. But at 200 degrees Celsius and 17 bars, Miriam Unterlass and her team at TU Vienna have synthesized organic polymers, which are usually extremely hard to create and require highly toxic additives. Instead of hazardous solvents, the team at TU Vienna uses nothing but harmless water vapour, making the new method extremely eco-friendly.

The principle of so-called “hydrothermal synthesis” is well known from geology. Many gemstones only form deep down in the ground, in high-pressure water reservoirs. In contrast to these inorganic minerals, which are often mainly made up of silicon and metal ions, many high-performance materials are organic. They primarily consist of carbon and hydrogen.

Kevlar is an example of such a high-performance polymer. It is extraordinarily robust and it is used for protective clothing or for construction elements that are intended to withstand extreme strain. Such materials also play an important role in aircraft construction, because they are much lighter than any metal parts with comparable properties. Organic high-performance polymers are huge organic molecules with a very stiff structure, kept in place by a multitude of bonds between the atoms.

Extremely Durable, but Hard to Synthesize

Such durable materials, however, are very hard to synthesize: “We have to deal with two contradictory requirements”, Miriam Unterlass explains. “On the one hand, we want to have rigid materials which do not dissolve and do not melt even at high temperatures. On the other hand, this means that we cannot just dissolve and then crystalize them, as we would if we were dealing with simple rock salt, for example.” The technique developed at TU Vienna works quite differently: the polymers are forming and are crystallizing simultaneously, uniquely supported by hydrothermal conditions.

There are many advantages to this procedure: no dangerous byproducts are created, the energy consumption is dramatically reduced, and the synthesis in the pressure reactor is much faster than it would be using any other techniques. Also, the final product is better: “Our method yields materials with higher crystallinity, which further improves the mechanical rigidity”, says Unterlass.

Looking Inside with Infrared Light

Fine-tuning of the process is complicated, however. Mass and energy transport inside the reactor have to be very well known to understand exactly what is taking place. Of course the pressured rector cannot just by opened during the reaction to see what is happening. Therefore, a special infrared probe is used, which can easily withstand the extreme conditions inside the reactor. “When we put the probe inside the reactor, we can follow in real-time what happens inside, without having to draw any samples”, Unterlass explains.

With the new high-temperature IR-probe – it is one of only two such devices worldwide – it will become easier to develop even more synthetic techniques. The team has plenty of ideas: “There is a plethora of organic molecules which promise great material properties if we manage to polymerize them”, says Miriam Unterlass.