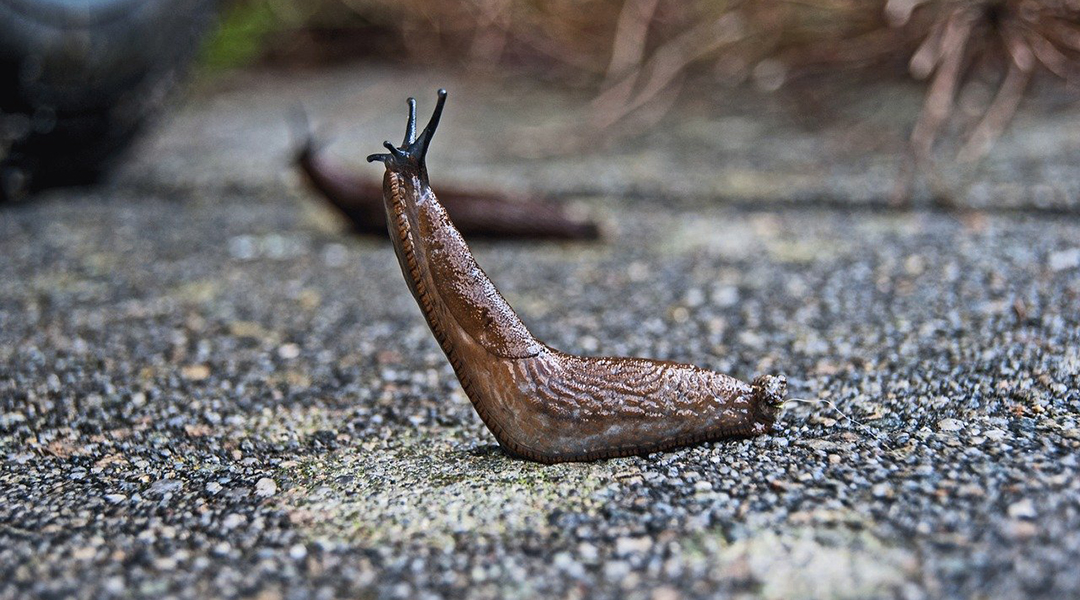 A slug’s soft body can rapidly take on a range of complex shapes. It has no limbs or skeleton, yet it can propel itself on a wide range of surfaces by generating traveling waves and by using its body to bridge gaps. How could these impressive attributes be used in robotics?

“The slug served as an inspiration for our fully-printed soft robot,” said Dr. Samuel Schlatter of EPFL. “It’s an amazing animal that illustrates many of the advantages of being soft, such as being able to pull in its antennas when threatened, squeeze through tight spots, and climb over sharp contours including razor blades. It can do all this thanks to its soft body, some slime, and a clever mode of locomotion.”

The field of soft robotics is rapidly growing thanks to the intrinsic safety of such devices for interactions with humans, and because of the complex shapes that rubbery machines can take on, they allow for greater versatility than more conventional rigid robots. Most soft machines consist of pneumatically or fluidically operated inflatable bellows: by pushing fluid into a cavity, one can control how one deforms the robots. This actuation method is effective but requires external compressors or pumps that make untethered operation very challenging.

Instead of relying on pumps, what if soft robots could be controlled electrically? This would mean an easier means of miniaturizing these systems, reducing power consumption, and thus paving the way for untethered soft robots capable of accomplishing complex tasks.

In a recent paper published in Advanced Intelligent Systems, a new method to create soft machines with dozens of soft electrically controlled actuators was demonstrated. Having many independent actuators enables highly articulated soft machines that can take on many different shapes to adapt to a broad range of tasks.

To accomplish this, new, soft, and efficient electrostatic zipping actuators were developed. These actuators work by expelling a liquid from one elastic reservoir to another to create controlled, local deformation. They were manufactured using an integrated printing process that combines dense arrays of electrostatic actuators, multi-layer electrical routing, and complex networks of microfluidic channels in one printing process.

Printing complete soft machines (soft body with integrated actuation mechanism) is highly sought after in robotics as it provides great design freedom and mitigates the need for device assembly — circuits and systems too complex for manual fabrication and assembly now become possible.

“We opted for ink-jet printing because of the high level of control on droplet size, and the ability to print many different types of materials, as long as the inks are carefully tailored,” explained Dr. Samuel Rosset of the University of Auckland and one of the study’s authors. Originally developed for printing text and images on paper, ink-jet printing is now widely used to pattern functional materials and organic electronics.

These printed soft machines work by transferring fluids from one cavity to another through channels embedded in the structure. Ink-jet printing creates layers only a few micrometres thick, which are perfect for most layers of the robot but too thin to create an efficient fluidic network. To work around this, millimeter-wide channels were created using micrometer-thick layers of sacrificial material printed inside the robot. Once the print job was complete, the sacrificial layers were dissolved, and the flat channels inflated, popping up from a few micrometers to nearly 1 mm thanks to the stretchability of the elastomers used. This takes advantage of the high resolution of inkjet printing to produce dense arrays of actuators, packing many close together while circumventing the thickness limitation of this printing technique.

Soft machines that can be produced with this innovative manufacturing process include soft pumps and slug-inspired object conveyors. The main challenge consists in the defect-free printing of a stack of functional layers (seven for the two mentioned applications), which was made possible through the careful development of printable mixtures that were compatible with each other. The peristaltic pump has six integrated actuators, and overlapping fluidic channels. The black regions are the electrostatic actuators that displace the yellow liquid, which in turn pump the pink liquid. Coupling of two independent fluidic circuits makes it possible to pump any liquid, including conductive liquids, such as water, blood, or cell culture media, for applications in the field of organs-on-a-chip and stretchable bioreactors.

Using the same printing technique, a soft machine called the “slug-drive” was created. It uses 28 integrated actuators and liquid channels to mimic the motion of (you guessed it) slugs in order to move objects. While these robotic slugs are yet too weak to ooze along, they can be placed on their backs and then used like a conveyor belt to move objects forward, thus creating active surfaces that can autonomously transport objects placed on them.

These soft devices demonstrate how inkjet-printing can produce densely packed, high-voltage actuators, including vias for electrical routing and integrated fluidic channels that can be inflated to transform a device printed in 2D into a three-dimensional soft machine. By developing techniques to also print sensors and logic gates, it will be possible to print fully smart self-contained soft machines, capable to take decisions and move accordingly.

Automating the Production of Advanced Materials
Are AI models explainable in a way that humans can understand them?
Swarm of autonomous tiny drones to localize gas leaks
Robotics and wearable technologies could help fight future pandemics