Matrix-metalloprotease (MMP)-sensitive hydrogel particles intend to utilize the unique properties of tumor cells, such as high concentration of MMP enzymes, along with the synergistic activities of an apoptosis-inducing protein (TRAIL) and the TRAIL sensitizer drug Quinacrine. 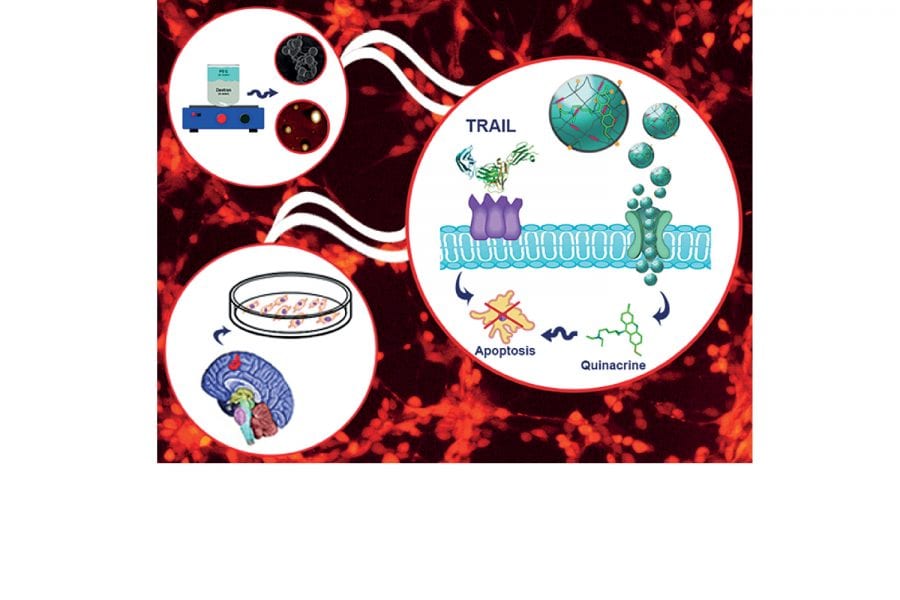 Glioblastoma multiforme (GBM) is the most common and aggressive primary brain tumor and patients have a poor survival rate of only 12 to 15 months after diagnosis. The existing therapeutic approaches are limited to tumor resection with concurrent radiotherapy and chemotherapy. However, significant improvements have not been achieved that would increase patient survival rates. The development of new therapy techniques is critical and could lead to major breakthroughs in the clinical success of GBM treatment.

Recent advances in polymer science and biomaterials are promising in addressing the limitations associated with GBM treatment through the development of controlled release systems. In their  paper in Macromolecular Bioscience, S. Kizilel, T. Bagci-Onder and colleagues at Koc University (Istanbul), report the synthesis of novel sub-micron size hydrogel carriers for simultaneous delivery of the two anti-cancer molecules: Quinacrine (QC) and TRAIL. Matrix-metalloprotease (MMP)-sensitive hydrogel particles are intend to utilize unique properties of tumor cells, such as high concentration of MMP enzymes, along with the synergistic activities of an apoptosis-inducing protein (TRAIL) and the TRAIL sensitizer drug QC.

TRAIL causes apoptosis of target cells and can selectively induce programmed cell death (apoptosis) primarily in tumor cells; however, many tumors can show resistance to TRAIL. The authors developed MMP-sensitive ligand crosslinked particles where particle degradation occurs due to strong secretion of protease enzymes by GBM cells followed by the release of the loaded QC from the carriers upon entry into the cells. Tumor receptor-targeting domains were also incorporated into the gel structure to promote adhesion of drug-loaded particles to GBM cells. Targeted PEG carriers were synthesized via visible light-induced cross-linking using a water-in-water emulsion system. The authors tested QC release from the functionalized carriers and evaluated the anti-tumor effect of QC in combination with TRAIL in human GBM cells. Results suggested that MMP-sensitive PEG hydrogel particles promote TRAIL-induced cell death in GBM cells, when loaded with QC. This synergistic activity of TRAIL and QC was not observed when QC or TRAIL were used alone. These nanoparticle carriers are promising to significantly improve the effectiveness of chemotherapeutic cancer drugs for GBM therapy.