Poly(phosphate): An excellent review about the polymer’s physiological function, its biochemistry and its role during bone mineralization. 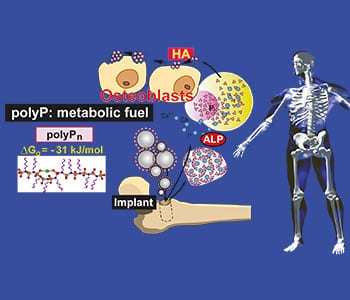 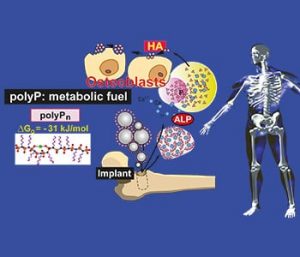 A new generation of bone implants aims for complete restauration of impaired tissue. Materials for complete bone tissue regeneration do not only have to be osteoconductive which means attracting and guiding cells to the lesion. They should also tell bone precursor cells to become active osteoblasts and, of course, be fully biocompatible and non-toxic.

Poly(phosphate) is a physiological polymer to be found in osteoblasts and platelets. The polymer is hydrolyzed by the enzyme alkaline phosphatase to orthophosphate monomers which serve as building blocks for bone formation. Evidently, bone formation requires a considerable amount of metabolic energy, for which the origin or source could not be determined yet.

Werner E.G. Müller, Xiaohong Wang (University Medical Center Mainz) and coworkers have demonstrated that the addition of fine-tuned nanoparticles consisting of poly(phosphate) and calcium ions lead to an increase in number of mitochondria and the ATP production rate after being uptaken in bone forming cells. The free energy which is released during hydrolytic cleavage of the anhydride bonds is assumed to serve as “metabolic fuel” for the metabolisation process.

In their Review Article, the scientists introduce poly(phosphate) as a novel biomaterial with tremendous potential as an implant material. The article gives an excellent overview about the polymer’s physiological function, its biochemistry and its role during bone mineralization. Poly(phosphate), a nontoxic and biocompatible natural polymer, could become an attractive fundamental building polymer in tissue engineering and especially interesting as bone reconstituting material.