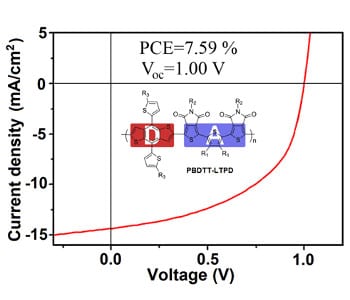 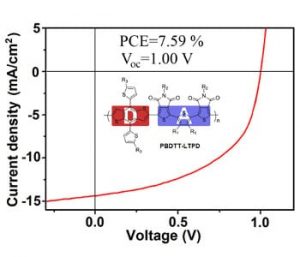 A team of researchers from the National Center for Nanoscience and Technology in Beijing has reported on high performance organic solar cells with an open circuit voltage above 1 V combined with high power conversion efficiencies (PCE) using a novel linked-acceptor type conjugated polymer. Their work can be found in the fourth issue of Advanced Science.

Polymer solar cells (PSCs) show great potential as future sustainable energy source due to their flexibility, light weight, and low cost. While various types of conjugated polymers have been synthesized and investigated for photovoltaic applications, in particular donor-acceptor (D-A) type polymers have received tremendous interest recently. These polymers are composed of electron-rich donor units (D) and electron-deficient acceptor units (A) alternately incorporated in the polymer backbone, and power conversion efficiencies of over 9% have been reported for solar cells based on D-A type polymers in the last two years. To further improve device performance, much work is currently focused on the synthesis of new materials, and a wide range of D- and A-building blocks and various compositions have been studied so far.

Prof. Z. Wei and his research team present the synthesis and characterization of a novel conjugated polymer based on a linked-acceptor unit: 4,8-bis(5-(2-ethylhexyl)thiophen-2-yl)benzo[1,2-b:4,5-b′]dithiophene (BDTT) and linked-thieno[3,4-c]-pyrrole-4,6-dione (LTPD) are combined with alkyl-substituted thiophene serving as a bridge. The introduction of a linked-acceptor unit increases the acceptor density in the chain as well as backbone twisting. As a result, the highest occupied molecular orbital (HOMO) level is decreased which, in turn, results in improved open-circuit voltages. In addition, the linked-acceptor unit allows for an enhancement of the absorption coefficient. PSCs fabricated with this novel polymer exhibit an open circuit voltage of 1.02 V, one of the highest values reported so far, and a maximum PCE of 7.59% is achieved.

The results of Prof. Z. Wei and his research team demonstrate that the introduction of linked-accptor units in the conjugated polymer backbone can serve as a clever design strategy to improve PCEs, open-circuit voltages, as well as current densities at the same time.