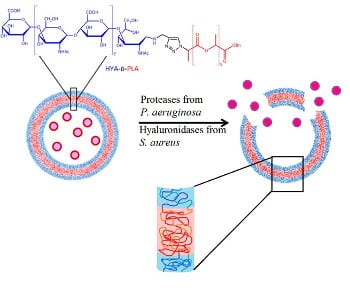 Bacterial infections play an increasingly important role in modern healthcare, in particular due to the occurrence of antibiotic resistance and the developing “antibiotic crisis”. Therefore the development of rapid, inexpensive in situ approaches for point of care infection diagnostics receives currently considerable attention.

In this context polymer-based infection diagnostics for application in, among others, wound dressings are investigated and developed. Holger Schönherr and co-workers (University of Siegen and Mainz, Germany) now report the implementation of selective trigger mechanisms that signal the presence of pathogenic bacteria via an easily discernible colorimetric signal. To this end bacterial enzymes are exploited as the trigger to break down reporter dye-filled “smart” polymeric capsules. The bacteria-sensing polymer capsules are composed of amphiphilic block copolymers, which are assembled into polymeric vesicles. Novel amphiphilic block copolymers of hyaluronic acid and poly(lactic acid) for the detection of pathogenic bacterial enzymes are synthesized and fully characterized. The biodegradation of dye-loaded nanocapsules by a dual enzyme trigger is studied and hence a proof of concept is provided. In addition cytotoxicity tests reveal no cytotoxicity.

The enzymatic degradation of the vesicle wall by the enzymes that are also produced e.g. by the pathogenic bacterium Staphylococcus aureus (hyaluronidase) and a model enzyme for proteases of Pseudomonas aeruginosa (proteinase K) results in the release of encapsulated dye molecules, which is detected due to the change in color and / or fluorescence intensity. The detailed characterization of these novel dual enzyme sensitive polymeric vesicles and the degradation kinetics is shown to provide the basis for the successful development of prototype wound dressings that will respond to low levels of enzymes in bacterial supernatants.