Researchers have created a low-cost, flexible bioelectronic device based on PEDOT:PSS, which they used for monitoring action potentials from cell tissues. 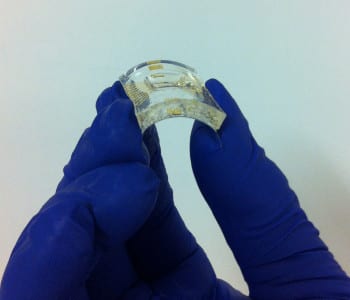 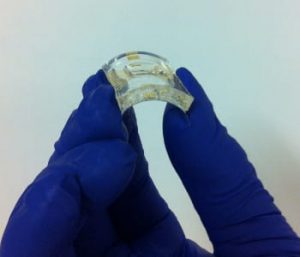 Bioelectronic devices have attracted a great deal of attention because of their potential biomedical applications, ranging from fundamental study to drug discovery. However, conventional bioelectronic devices have issues that are hindering their wider application; for example, they are relatively expensive, and their rigid mechanical properties can hardly be considered compatible with soft biological tissue.

A team from Hong Kong now has made a step in solving these problems by developing a single low-cost, flexible bioelectronic device based on the commercially available conducting polymer poly(3,4-ethylenedioxythiophene) polystyrene sulfonate (PEDOT:PSS). They then used their flexible device for monitoring action potentials from cell tissues.

The group constructed an organic electrochemical transistor (OECT) array from PEDOT:PSS, using a flexible substrate of polyethylene terephthalate (PET), a common low-cost plastic which is widely used in manufacturing water bottles. They found that the cell behavior and the signal quality recorded on these device were comparable to those on rigid one. Drug testing experiments also revealed that the OECT-based flexible device can be used for drug discovery.

The researchers believe that the cost of their device can be lowered further by adopting printing technology, as PEDOT:PSS is solution-processable and so could be printed onto substrates directly. They hope such low-cost, flexible devices could serve as inexpensive, disposable tools to facilitate fundamental studies and drug discovery.