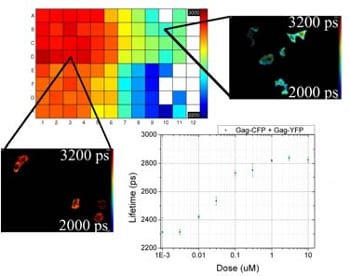 The trend towards automated high content assays, particularly for systems biology and drug discovery, has stimulated the development of automated fluorescence microscopy systems to image sample arrays. Today’s commercially available high content analysis (HCA) instruments predominantly employ fluorescence intensity imaging to map the relative distribution and colocalization of labelled proteins with subcellular resolution. Although commonplace in biology laboratories, Förster resonant energy transfer (FRET) measurements have not been widely taken up for drug discovery. Conventional (manual) FRET microscopy is too time-consuming and labour-intensive for high throughput applications. One of the most widely used approaches to map FRET is fluorescence lifetime imaging (FLIM). However, a lack of available FLIM instrumentation for automated multiwell plate readouts is constricting its use in drug discovery.

HIV-1 Gag proteins are the molecular machine responsible for orchestrating the assembly of nascent HIV-1 virions at the cell membrane. Upon oligomerisation of two or more Gag proteins, a sequestered myristic acid moiety present in Gag monomers is exposed to the solvent. This ‘myristic switch’ mechanism drives membrane binding – providing an opportunity to interfere with virion formation. Labeling Gag proteins with fluorescent protein tags enables their distribution to be visualized and formation of viral like particles can be assayed using FLIM-FRET.

For their improved FLIM FRET assay of Gag protein aggregation, the researchers chose HeLa cells as a superior biological host. With help of the new automated FLIM plate reader it was possible to discriminate different biomolecular processes as the HIV-1 Gag protein interactions were manipulated through the use of myristic acid negative mutants that are unable to bind the plasma membrane. Furthermore the scientists applied an inhibitor of myristoylation to permit, for the first time, a quantitative evaluation of FLIM FRET assay performance using dose response curves and calculation of Z’ factors. They used this metric to compare the assay performance of hetero-FRET and homo-FRET readouts of the Gag protein interactions. This study is the first FLIM assay of protein aggregation based on homo-FRET (donor and acceptor molecules are the same).

The researchers are planning to utilise this new capability to screen for other novel inhibitors of HIV formation with a view to developing therapies for HIV and other viral infections.