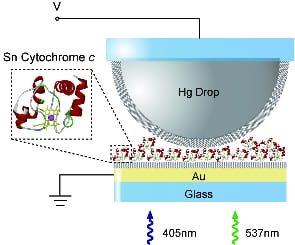 Electron transfer across proteins plays an important role in many biological processes, including those relevant for the conversion of solar photons to chemical energy. For this reason, considerable efforts have been undertaken over the past four decades to investigate protein-mediated electron-transfer reactions, ultimately aiming toward the integration of biomolecules into potential technological platforms, enabling bioelectronics and medical applications.

Sn-cytochrome c layers are shown to act as reversible and efficient photoelectrochemical switches when integrated into solid-state junctions.

Previous studies have demonstrated that the generation of photocurrents upon light irradiation can be induced in a number of photoactive proteins, such as photosystem I or bacteriorhodopsin. However, the transfer of these molecules from the biological environment into solid-state devices is generally accompanied by a significant loss in signal intensity, mostly due to the intricacy of forming biocompatible and efficient interfaces between biomolecules and electrodes. In fact, most protein-based photoelectrical transducers have been so far realized in liquid environments (e.g. physiological buffer solutions), whereas solid-state devices have shown quite limited photoresponses to date.

In a recent article in Advanced Materials, researchers from Sony Corp. demonstrate that Sn-cytochrome c (cyt c) protein layers can be used as efficient photodetectors when integrated into large-area solid-state junctions. The junctions are based on transparent gold substrates coated with a protein monolayer via incubation in solution. The protein monolayer is subsequently contacted by a soft, conformal Hg top-electrode, which means that possible short circuits in the junction are avoided. Upon light exposure, the Sn-cyt c layer acts as a reversible photoconductor, exhibiting high photocurrent response and photocurrent on/off ratios of up to 25. These results represent a leap forward in solid-state protein research, opening new opportunities for light-sensing applications in bioelectronics.