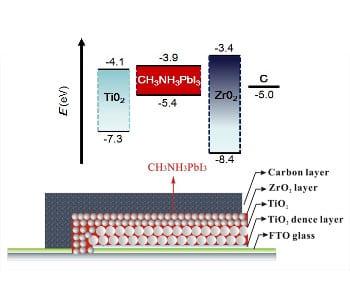 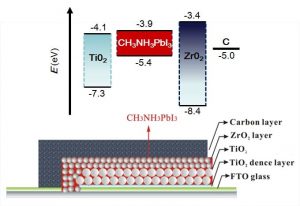 Solar energy promises to be an important part of our future global energy mix, and the demand for photovoltaics is already experiencing a steep increase in countries like Germany, where they have set the ambitious goal of producing 35 percent of their electricity from renewable sources by 2020 (with 100 percent by 2050). Solar cells are likely to continue to be a large part of this transition, but researchers are still auditioning candidates for exactly which types of devices and materials are ripe to make the jump to such large-scale use. The ideal solar cell should be of high efficiency, made of earth-abundant materials, cheap to process, and stable over long time scales. The incumbent technology chiefly involves silicon-based solar cells, but new contenders are gaining on them fast, and perovskites are the latest challenger to enter the ring.

Perovskite solar cells came on to the scene in 2013, and since then they have taken the world of photovoltaics research by storm, reaching more than 17 percent efficiency in just two years. This unprecedented climb has demanded the attention of proponents and skeptics alike, already achieving an approximate level of performance that the relatively mature silicon technology took decades to attain. The problem is in the stability, where the performance tends to degrade quickly upon exposure to moisture and oxygen from the atmosphere, and particularly at high temperatures. Recent results from Michael Grätzel at EPFL in Lausanne, Switzerland along with an international team of collaborators from Saudi Arabian and Chinese universities have directly addressed this issue, showing excellent device stability without any measureable degradation under realistic outdoor conditions in the hot, humid climate of Jeddah, Saudi Arabia. As if to drive home the point further, the cells tested outdoors achieved their peak performance at the hottest time of the day, and after one week actually exceeded the open-circuit voltage performance of the original indoor test by 100 mV. This could be a game changer for the next generation of photovoltaics technology.

Perovskite solar cells are a variation on dye-sensitized solar cells (DSSCs), in which a solid metal-halide dye of perovskite (CaTiO3) crystal structure is used as the light absorber. The CH3NH3PbI3 absorber material used in Grätzel’s work is solution processible, which is beneficial to large-scale commercialization, with potential for fabrication of the devices by using high-throughput (and potentially inexpensive) methods such as printing. In this work, the researchers also replaced the conventional metal contact materials and electron-blocking layer with a simple carbon black/graphite material that could be cast from solution. By eliminating the need for energy-intensive metal evaporation, this removes a critical barrier to the realization of such inexpensive processing for all components of the solar cell device. Perovskite CH3NH3PbI3 layers typically tend to decompose to produce PbI2 at high temperatures, but the cells with the new architecture introduced in this study showed no evidence of degradation during outdoor tests or accelerated aging experiments performed with prolonged exposure to high temperatures (over 80°C for three months). These results are promising and show that the stability problems that perovskite solar cells have exhibited to date are not fundamental to the material, and can likely be overcome with intelligent material selection and device design. As more research groups become drawn to the material, progress in the field is sure to accelerate, and perovskite solar cells may soon be in a position to challenge silicon-based devices, which almost no one could have predicted just two short years ago.