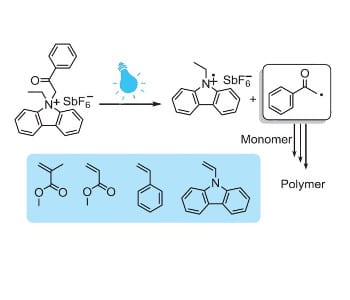 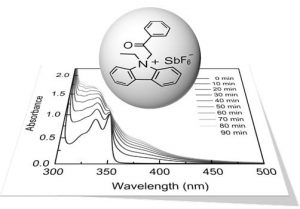 ymer community and other multidisciplinary areas. We can now see the influence and importance of photoinitiated polymerizations in our daily lives in different sophisticated and advanced technologies such as coatings, adhesives, printing inks, stereolithography, holographic recording and many more. The challenge is to efficiently initiate a polymerization process using appropriate materials which are best suitable for a target application. In this regard, a great deal of research efforts is dedicated to designing and developing new photoinitiating systems. 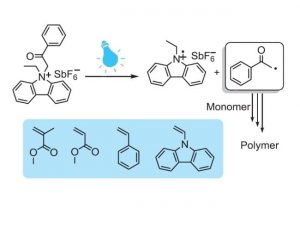 It is interesting to note that the photoinitiator efficiently initiates free radical polymerization of a variety of vinyl monomers, but apparently is not applicable in cationic polymerization. This behavior contravenes the typical features of phenacyl-based photoinitiators in generation of cationic species for initiating cationic polymerization. It has been suggested that this may be due to the tendency of the photo-fragments to couple through carbazole units and thermodynamically unfavorable redox potential of the salt. The combination of photo-fragments could probably lead to new possibilities for the new synthesis of conducting polymers with potential applications in various areas.