US government-funded research pays off with new process for environmental remediation. 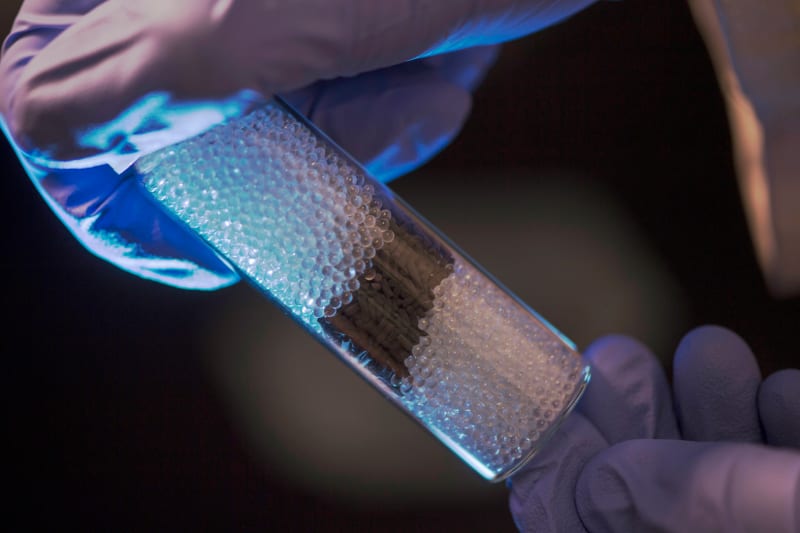 Researchers from Rice University, DuPont Central Research and Development and Stanford University have announced a full-scale field test of an innovative process that gently but quickly destroys some of the world’s most pervasive and problematic pollutants. The technology, called PGClear, originated from basic scientific research at Rice during a 10-year, federally funded initiative to use nanotechnology to clean the environment.

PGClear uses a combination of palladium and gold metal to break down hazardous compounds like vinyl chloride, trichloroethene (TCE) and chloroform into nontoxic byproducts.

“Chlorinated compounds were widely used as solvents for many decades, and they are common groundwater contaminants the world over,” said Rice’s Michael Wong, professor of chemical and biomolecular engineering and the lead researcher on the PGClear project. “These compounds are also extremely difficult to treat inexpensively with conventional technology. My lab began its work to solve this problem more than a decade ago.”

DuPont researcher John Wilkens said, “The problem-solving for this technology began at the nanoscale. Mike and his team were working with nanoscale catalysts when they developed the technology that would ultimately become PGClear. The scale of the technology was subsequently enlarged to permit use in conventional reaction systems for field implementation.”

The first large-scale PGClear unit, which is designed to treat groundwater contaminated with chloroform, is scheduled for installation at a DuPont site in Louisville, Ky., in June. The 6-by-8-foot unit contains valves and pipes that will carry groundwater to a series of tubes that each contain thousands of pellets of palladium-gold (PG) catalyst. The pellets, which are about the size of a grain of rice, spur a chemical reaction that breaks down chloroform into nontoxic methane and chloride salt.

“The palladium-gold catalyst has so far performed well for remediating groundwater samples collected at DuPont,” said Brad Nave, director of the DuPont Remediation Project. “While the project is not yet full-scale, our next step will subject the technology to the rigors of real-world field conditions. Rice, Stanford and DuPont have been working on the details of the field pilot for several years, and we’re looking forward to a successful test.”

When chloroform-contaminated water is flowed through a column containing PGClear pellets, the palladium and gold in the pellets spurs a chemical reaction that breaks down chloroform into nontoxic methane and chloride salt. Jeff Fitlow/Rice University.

Wong began working on the catalytic remediation technology shortly after arriving at Rice in 2001, the same year Rice won a grant from the National Science Foundation for the Center for Biological and Environmental Nanotechnology (CBEN). CBEN, a 10-year, $25 million effort, was the world’s first academic research center dedicated to studying the interaction of nanomaterials with living organisms and ecosystems. CBEN was one of the first six U.S. academic research centers funded by the National Nanotechnology Initiative.

“Prior research had shown that palladium was an effective catalyst for breaking down TCE, but palladium is expensive, so it was thought to be impractical,” Wong said. “At CBEN, we used nanotechnology to design particles in which every atom of palladium was used to catalyze the reaction. We also found that adding a tiny bit of gold enhanced the reaction.”

DuPont contacted Wong about the award-winning research in 2007 and proposed developing a scalable process to use the palladium-gold catalysts to treat other chlorinated pollutants like chloroform and vinyl chloride. With additional support from the World Gold Council in London, researchers from Rice and DuPont worked to refine the catalyst and the process. They also worked with the South African mineral research organization MINTEK, which produced the catalytic pellets for the first PGClear unit. Gold and palladium make up only about 1 percent of material in each of the purple-black pellets.

Palladium and gold make up only about 1 percent of the material in purple-black PGClear pellets, which are about the size of a grain of rice. Image: Jeff Fitlow/Rice University.

“This program is important because of its unique three-stage collaboration: Rice’s laboratory work, Stanford’s pilot-scale reactor technology and DuPont’s expertise in industrial operations and field-pilot testing. Without these three aspects coming together, the technology might never have left the laboratory,” Wong said.

Stanford’s Martin Reinhard, professor of civil and environmental engineering, said, “It is gratifying to take the outstanding lab results one step closer to practical use. Once operational, PGClear will be the first technology of its kind to use gold and palladium.”

Chlorinated compounds like TCE, vinyl chloride and chloroform are found at more than 60 percent of the contaminated waste sites on the Superfund National Priorities List. Wong said that by analyzing the monthslong performance of the PGClear unit in Kentucky, the research team aims to make the technology available at Superfund sites and elsewhere.

“This project is a perfect example of how federal research funding pays off when academic researchers partner with industry to tackle difficult problems,” said Rice’s Vicki Colvin, vice provost for research and former director of CBEN.