Optical microangiography (OMAG), based on optical coherence tomography, can be used to visualize the microvasculature network under inflamed skin condition.

Optical microangiography (OMAG), a technique based on optical coherence tomography, can be used to visualize the microvasculature network under inflamed skin condition. It opens up new vistas for clinical trials of treatment and diagnosis of inflammatory skin disorders. 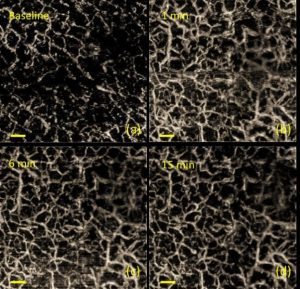 Tape stripping is a commonly used method to increase the penetration depth of drug delivery. It has also been used to investigate the physiology of the stratum corneum (SC) as well as the kinetics and penetration depth of topical drugs. During the tape stripping process, the SC is sequentially removed by a serial number of stripping procedures. Yet, tape stripping induces mechanical disruptions of the epidermal barrier that lead to skin inflammation. Similar to many other inflammatory skin disorders, microvascular remodeling is usually involved. Surprisingly, little work has been done on revealing the microvasculature changes and/or to correlate the degree of the vascular reactions with the degree of damage produced.

A team from the University of Washington, Seattle, USA, now propose to apply tape stripping on in vivo human skin to produce a simple but representative skin inflammation condition and utilize optical microangiography (OMAG) to track the microvascular changes after this procedure.

OMAG, a technique based on optical coherence tomography (OCT), is a non-invasive interferometric method for in vivo skin imaging. It is capable of producing millimeter-scale cross-sectional morphological views of tissue microstructures with a micron-level imaging resolution. OCT detects the scattered photons. The imaging contrast is originated from the variance of refractive index within heterogeneous tissue. An imaging depth of 1–3 mm can be obtained. Other than traditional OCT, OMAG is able to provide volumetric vasculature images and 3D blood perfusion maps in microcirculatory tissue beds. It works by analyzing both the intensity and the phase information embedded in the OCT spectral interferograms.

The team was able to prove that microvasculature changes followed by tape stripping can be detected using OMAG. Vessel density could be quantified and correlated with the degree of skin irritation. This means that the OMAG technique can help to gain more insight into microcirculation dynamics before and after tape stripping. The study confirmed that appropriate tape stripping causes only minimal inflammation to human skin. It can be considered as a relatively safe method to study drug delivery and related topics.

OMAG can also be used to differentiate between normal and irritated skin. Many skin diseases, such as psoriasis, rosacea, and UV damage, are linked to either insufficient or overactive vasculature. In addition, some systemic diseases, such as inflammatory bowel disease, rheumatoid arthritis, atherosclerosis, and asthma, have also shown to be associated with peripheral microvascular modifications. Stating skin microvascular function using OMAG could, therefore, provide helpful information when evaluating this type of diseases as well as treatment effects.