This week, Professor Ozin defends that most maligned of molecules, carbon dioxide. 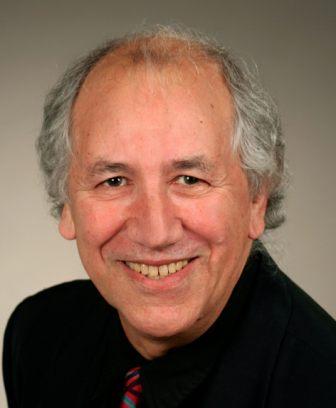 To love or hate

To understand you better

Before it’s too late!

Of the three small molecules that dominate the composition of our earth’s atmosphere, it is the minor component, CO2, that we are beginning to fear because of the looming Armageddon global warming scenario arising from the accumulation of greenhouse gas in the troposphere. While O2, N2, and CO2 brought about and maintain life on our planet, CO2 – the combustion product of the human race – now threatens its demise.

It is the innate ability of humans to recognize and react defensively to danger and in doing so learn how to survive that has inspired a global effort to understand how to transform CO2 into a clean-house gas!

While these days CO2 might be considered the molecule to hate there are many reasons why our relationship with it could be transformed into an eternal love affair. In this article I will take a look at how CO2 emerged into our scientific consciousness, how it became the molecule of choice for numerous products and processes, how its abuse and misuse are becoming a looming ecological, environmental, and sociological nightmare, and how this fear of the consequences of global warming is driving a scientific and technological revolution aimed at making CO2 into a friend rather than a foe, by learning how to capture and recycle it back into a useful fuel rather than simply capture and store it, the latter considered an unsafe practice and banned in some countries.

Jan Baptista van Helmont (1580–1644) a Flemish chemist, physiologist, and physician, whose research was contemporary with Paracelsus, remembered for his neologism of the word gas (Greek chaos), is given credit for the discovery in 1630 of carbon dioxide, as an off-gas in the combustion of wood, which he named gas sylvestre, wood gas.

The Scottish chemist Joseph Black (1728–1799) first proved in 1756 that carbon dioxide occurred in the atmosphere, and called it fixed air. He also showed it is a product of human and animal respiration and microbial fermentation and that it has a fascinating chemistry exemplified by the precipitation of limestone (calcium carbonate) by bubbling carbon dioxide into aqueous lime and reversed by heating the resulting limestone. He showed carbon dioxide to be denser than air and able to extinguish both flames and life.

Joseph Priestley (1733–1804) could be considered the father of the soft drink industry with his discovery in the mid-1700’s that carbon dioxide evolved from the action of oil of vitriol (sulfuric acid) on chalk (calcium carbonate) could be dissolved in water to produce a pleasantly flavored fresh sparkling soda water.

Imagine what these CO2 pioneers would say today if they had known in addition to CO2-driven photosynthesis in plants to produce carbohydrates, which feed humans and animals, and the beneficial effects of natural CO2-based climate control of the planet to stabilize it at the right temperature for maintaining life, that if allowed to increasingly accumulate in the atmosphere, CO2 could also cause long term harmful effects to the human race and life on earth.

Our love affair with CO2 is seen in its many uses, including soft drinks, dry ice solid refrigerants, ingredients in frozen food, cooling bunches of grapes in wine making, atmosphere for reactive welding, capsules for air guns, extinguishers for electrical and oil fires that cannot be put out by water, supercritical solvent for the environmentally friendly and safe removal of caffeine from coffee to help the old to be put in the coca cola to help the young, the first infrared gas laser, and an enabler for enhanced oil recovery.

In the natural world carbonate biominerals are omnipresent in calcareous forms such as calcite and aragonite coccolithophores, sponge spicules, echinoderms, corals and the molluscan shell, the shapes and patterns of which continue to visually impress and intellectually challenge our understanding of morphogenesis, the origin and control of natural form.

The manufacture of chemicals and pharmaceuticals, fuels, and polymers from CO2 using well-established technologies is growing in importance but is currently having only a minor impact on the roughly 10 Gt of yearly anthropogenic CO2 emissions. It has been estimated that the implementation of these chemical technologies in large-scale industrial processes could reduce CO2 emission by as much as 350 Mt yearly; however, this only represents about 3-6% of annual anthropogenic CO2 emissions even when added to the corresponding reduction in fossil fuel usage as a result of these kinds of CO2 processes.

In this context, a promising area for research and development is the sunlight-driven conversion of CO2 and H2O to energy-rich and transportable fuels like CH4, CH3OH, and HCO2H but to achieve a steady state in atmospheric CO2 this will have to be implemented in a process that utilizes earth abundant, low cost, and non-toxic materials operating at globally significant rates and scales in order to stand a chance of making a real impact on the problem of anthropogenic CO2. 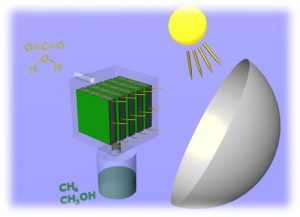 While there are currently around half-a-dozen approaches competing for this CO2+ H2O + sunlight grand prize including solar thermal, homogeneous and heterogeneous catalysis, biomass, electrocatalysis and photoelectrochemistry, it is likely that the most practical and economically viable programs for large-scale CO2 capture and recycling (CCR) to chemical fuels will involve gas-phase flow-based photocatalytic reactor units. They will likely work alongside CO2 capture, purification and storage (CCS) technologies, possibly based on metal organic frameworks, frustrated Lewis pairs or amine resins, integrated into CO2 emitting fossil fuel power plants and iron, steel, cement and aluminum production facilities, working at low pressures and temperatures and driven by sunlight (image credit, Dr Wendong Wang).

One can also imagine personalized versions of these CCS+CCR units installed in homes and buildings, generating from CO2 + H2O solar fuels like methanol or methane used for heating and lighting as well as for powering cars.

So what will it take for CO2 + H2O + sunlight photocatalysis to outperform photosynthesis? Simple, the right (nano)material!