Now You See It, Now You Don’t: Self-Destructing Electronics

Researchers have developed transient electronics that self-destruct via sublimation in dry conditions. 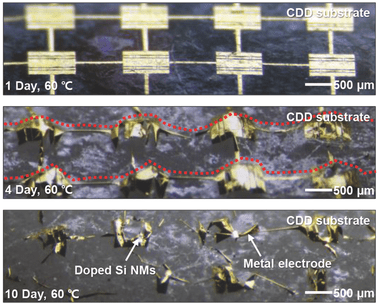 Microscopic images of disintegration of an array of transistors as a result of sublimation of a supporting substrate of CDD. a) Images that illustrate the process of self-destruction after 1, 4, 10, and 12 d, at a temperature of 60 °C. b) Additional images corresponding to each case in part (a).

Transient electronics are devices that serve a temporary purpose—such as a biomedical implant or data storage device—and eventually disappear upon some trigger, leading to biodegradation, dissolution, depolymerization, or mechanical self-destruction. Most of these degradation mechanisms are designed to initiate in wet environments. However, applications in dry or extreme environments—in the desert, at high altitudes, or even in space—are also needed. Sublimation as a means of deterioration avoids complications that arise with liquids, like uncontrolled reaction rates and segregation of the liquid from the other device components.

John A. Rogers et al. have developed transient devices that can disintegrate via sublimation in ambient conditions. They achieved this by integrating a sublimating substrate such as cyclododecane (CDD) or camphor into silicon-based transistor arrays. The sublimation rate could be controlled by various factors, including air velocity (ventilation) and the physical characteristics of the film (size, shape). By incorporating titanium dioxide nanoparticles, the sublimation rate could also be reduced by reducing the exposed surface area. As the CDD sublimes, the support structure disappears, causing mechanical destruction of the device after about 12 days. The method was also compatible with a commercial silicon solar cell, which disintegrated after several days.