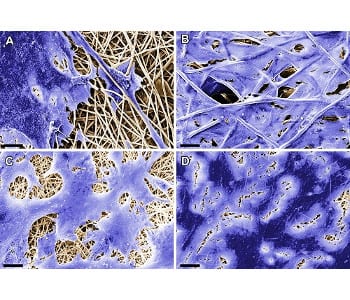 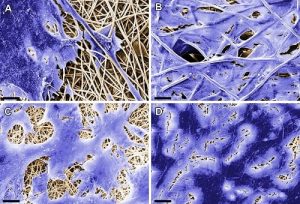 Donor organs or synthetic implants are usually the only treatment option for patients who have suffered irreparable damage to internal organs or body tissue. But such transplants are often rejected. Implants based on autologous cells are more likely to be accepted by the human organism. But in order to grow, these cells require a compatible structural framework.

Researchers at the Fraunhofer Institute for Interfacial Engineering and Biotechnology IGB in Stuttgart are working on a project to develop suitable substrates – known as scaffolds – in collaboration with the university hospital in Tübingen and the University of California, Los Angeles (UCLA). Their solution is based on electrospinning, a process in which synthetic and biodegradable polymers such as polylactides are spun into fibers using an electrical charge. These fibers are then used to create a three-dimensional non-woven fabric.

The scientists have chosen a novel approach in which proteins are added to the polymeric material during the electrospinning process, and become incorporated in the resulting hair-thin fibers. In this way, the material serves as a substrate to which the patient’s own cells will bind after it has been implanted.

“Electrospinning enables us to create a cell-free substrate on which cells can grow after it has been implanted in the patient’s body. Each type of protein attracts specific cells, which adhere to the scaffold and grow there. By selecting the appropriate protein, we can build up heart tissue or regenerate other damaged organs,” explains Dr. Svenja Hinderer, one of the research scientists working on this project at Fraunhofer IGB in Stuttgart.

The results of initial laboratory experiments and bioreactor tests have been very successful so far. The researchers have been able to demonstrate that esophageal/tracheal cells, which are difficult to culture in-vitro, are capable of binding to decorin protein fibers in the substrate and growing there. Another protein – the stromal-cell derived growth factor SDF-1 – binds with progenitor cells, a special type of stem cell necessary for constructing heart valves and for regenerating heart muscle cells after an infarction.

“The implants we have fabricated using electrospinning demonstrate the same mechanical and structural properties as a normal heart valve. Like the original version, they close and open at a blood pressure of 120 to 80 mmHg during tests in a bioreactor,” says Hinderer. The next step for the researcher and her colleagues is to test the protein-coated scaffolds in animal models.