This study presents a novel route to investigate the as-quenched condition of age-hardenable aluminum alloys. 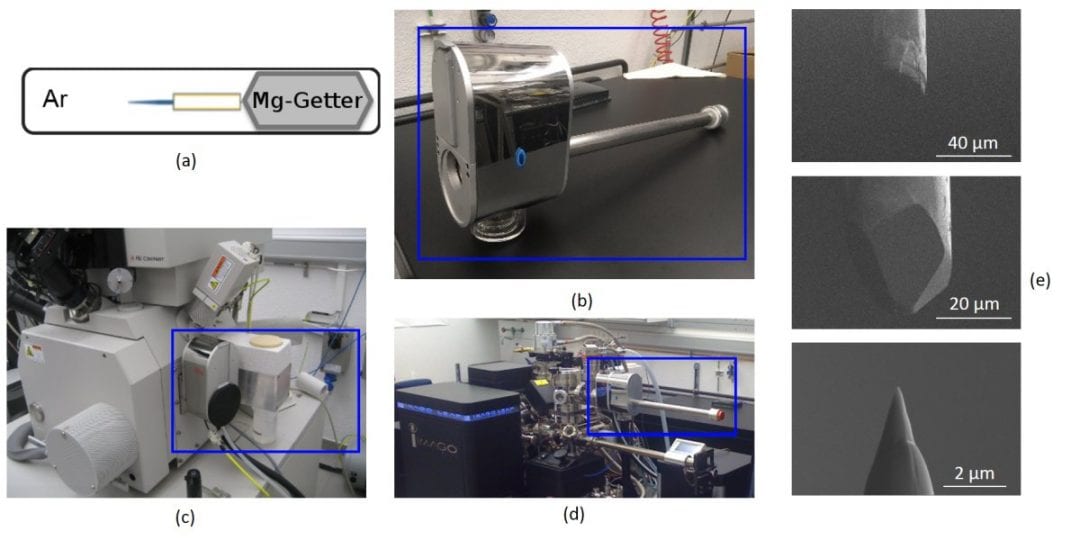 In aluminum alloys, precipitation is the main strengthening mechanism enhancing the mechanical properties. Automotive parts made from Al-Mg-Si are typically solution heat treated, quenched, stored at room temperature, formed to its final shape, and finally aged in order to increase the mechanical properties. At room temperature storage so-called “natural aging” occurs, i.e. the material shows hardening over the time of storage. This starts immediately after quenching due to rapid clustering of the solute atoms. To date only indirect characterization of the clustering after the first few minutes has been possible, and the nature of the first clustering process is a long-standing debate.

Pogatscher et al. have recently reported the use of atom probe tomography (APT) to characterize such materials, which can be used for direct cluster visualization. In APT a needle-like specimen is produced, (with a very small tip radium in the order of 50 nm) from which surface ions are removed by applying a strong electrical field. Through successive evaporation layers of atoms are removed from the needle tip, which provide information on the atomic arrangement. From the time of flight, the detector position, and the sequence of arrival a 3D chemical map of the material can be reconstructed.

Generally, the time needed for sample preparation and for the transfer into the ultrahigh vacuum system makes an investigation of the rapid clustering impossible directly after quenching. Here a new method to gain direct insight into the as-quenched microstructure via APT is presented. Diffusion of solutes during sample preparation and handling is suppressed via application of cryogenic temperatures, beginning from quenching in liquid nitrogen, sample preparation via cryogenic focused ion beam (FIB), and cryogenic sample transfer to the APT analysis chamber at 33 K. Researchers from MU Leoben and ETH Zurich show spatial solute distribution and the influence of energy input on the solute distribution via cryogenic FIB, and propose Si to be the first solute involved in low-temperature clustering in Al-Mg-Si alloys.