A novel probe for in vivo sialome imaging

Researchers in China have developed a novel probe for in vivo sialome imaging. Based on the click reaction the fluorophore is generated in situ. 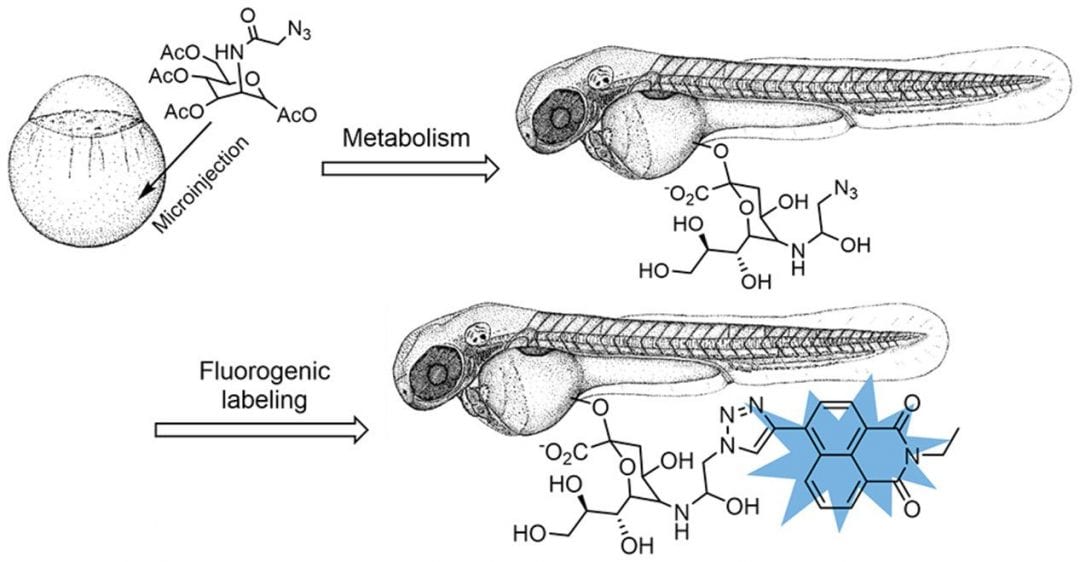 Sialic acids are monosaccharides with a nine-carbon backbone. Naturally they occur bound to proteins and lipids embedded in the cell membranes of animals where they mediate a plethora of biochemical interactions happening at the cell surface. Therefore, imaging of sialic acids is key to understanding fundamental biomolecular processes. Metabolic glyco-engineering combined with novel labeling strategies provides a route to incorporate fluorescent sialic acid precursors into the glycan chains present on the cell-surface. 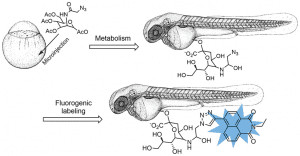 X.-Z. Zhang and co-workers have now developed a novel probe for in vivo sialome imaging relying on two-photon excitation microscopy. Using the well-known copper(I)-catalyzed azide-alkyne cycloaddition, more commonly known as the click reaction, the profluorophore Naph-yne is reacted with a sugar precursor, the peracetylated N-azidoacetylmannosamine. The Naph-yne probe is only turned into a strong fluorophore with high quantum yield upon formation of the 1,2,3-triazole unit. This specificity does not require washing out of unreacted fluorophores – one of the fundamental requirements for imaging live cells. The system was first employed to HeLa cells yielding promising results with respect to labeling efficiency and specificity. For in vivo testing, a zebrafish model was used where specific sialome labeling and subsequent imaging could also be achieved with this technique. Two-photon excitation microscopy confirmed that the in situ generated, fluorescently labeled sialic acid molecules were incorporated into the sialomes via the biosynthetic pathway. This achievement paves the way for a number of exciting applications at a cellular and organismal level where deep-tissue imaging comes now in sight.