Duke University engineers have developed a material that can be applied like paint to the hull of a ship and dislodge bacteria from the ship's surface. 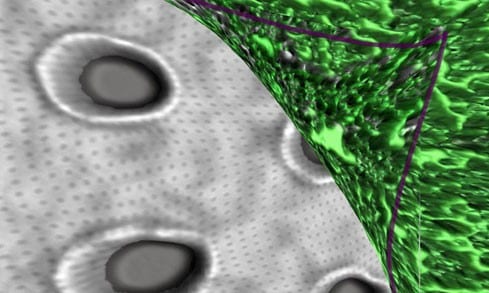 Duke University engineers have developed a material that can be applied like paint to the hull of a ship and will literally be able to dislodge bacteria, keeping it from accumulating on the ship’s surface. Such a buildup on ships increases drag and reduces the energy efficiency of the vessel, as well as blocking or clogging undersea sensors.

The material works by physically moving at the microscopic level, knocking the bacteria away. This avoids the use of bacteria-killing paints, which can contain heavy metals or other toxic chemicals that might accumulate in the environment and unintentionally harm fish or other marine organisms. The Duke researchers also say that similar types of materials could be used in other settings where the buildup of bacteria – known as biofilms – presents problems, such as on the surfaces of artificial joint implants or water purification membranes.

“We have developed a material that ‘wrinkles’ or changes it surface in response to a stimulus, such as stretching or pressure or electricity,” said Duke engineer Xuanhe Zhao, assistant professor in Duke’s Pratt School of Engineering. “This deformation can effectively detach biofilms and other organisms that have accumulated on the surface.” The results of the Duke studies were published online in the journal Advanced Materials.

Zhao has already demonstrated the ability of electric current to deform, or change, the surface of polymers. “Nature has offered many solutions to deal with this buildup of biological materials that we as engineers can try to recreate,” said Gabriel López, professor of biomedical engineering and mechanical engineering and materials science. He also serves as director of Research Triangle Materials Research Science and Engineering Center (MRSEC), which is funded by the National Science Foundation.

“For example, the hair-like structures known as cilia can move foreign particles from the lungs and respiratory tract,” Lopez said. “In the same manner, these types of structures are used by mollusks and corals to keep their surfaces clean. To date, however, it is been difficult to reproduce the cilia, but controlling the surface of a material could achieve the same result.” The researchers tested their approach in the laboratory with simulated seawater, as well as on barnacles. These experiments were conducted in collaboration with Daniel Rittschof the Duke University Marine Lab in Beaufort, N.C.

Keeping bacteria from attaching to ship hulls or other submerged objects can prevent a larger cascade of events that can reduce performance or efficiency. Once they have taken up residence on a surface, bacteria often attract larger organisms, such as seaweed and larva of other , such as worms, bivalves, barnacles or mussels.”It is known that bacterial films can recruit other organisms, so stopping the accumulation process from the beginning in the first place would make a lot of sense,” Lopez said.