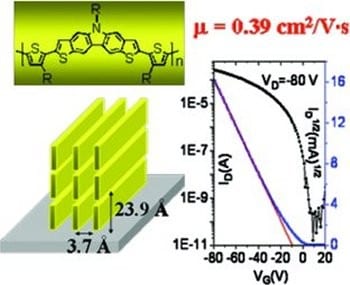 Yanhou Geng (Changchun Institute of Applied Chemistry) and co-workers have now synthesized a new heteroacene comprising five fused rings, i.e. dithieno[3,2-b:6,7-b]carbazole, for constructing high mobility conjugated polymers. In this new heteroacene unit, an alkyl chain can be introduced at the N-atom for improving the solubility and self-assembly ability of the resulting conjugated polymers. In thin films, the polymer backbones dominantly adopt an edge-on orientation with respect to the substrate to form highly ordered thin films with a lamellar spacing of ~24 Å and a π-stacking distance of 3.7 Å. A remarkably high hole-mobility of up to 0.39 cm2V-1s-1 has been demonstrated as measured in bottom gate and top-contact organic thin-film transistors.

This mobility value is the highest among conjugated polymers containing heteroacenes with more than four fused rings rendering the material a promising candidate for organic thin film transistors.