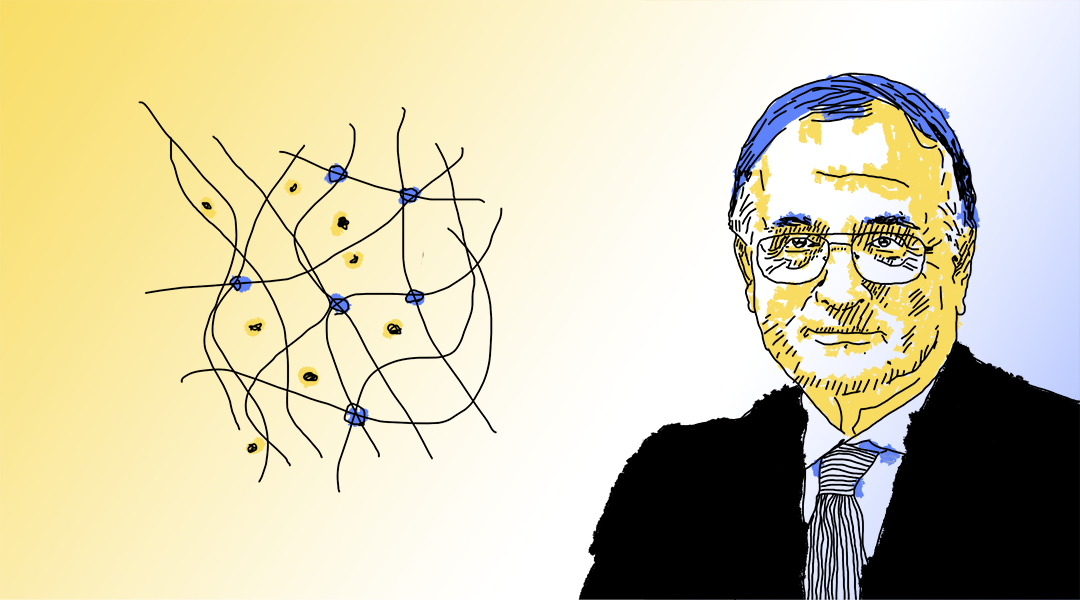 Few active scientists could be considered pioneers. Often, it is through the lens of hindsight that we appreciate an individual’s or group’s contribution to a field, but Nicholas Peppas has truly pioneered the development of healthcare materials and drug delivery — and shows no sign of slowing down.

A special issue dedicated to his life’s work has recently been published in Advanced Healthcare Materials, guest-edited by Kristi Anseth, who sits on the advisory board of the journal, and Younan Xia, the journal’s chairman. Anseth herself conducted undergraduate research under Peppas, and the issue is a rich collection of researchers who started their careers with Peppas and who are now taking his work to new frontiers.

Born in Athens, Greece, in 1948, Peppas began his career at the National Technical University of Athens before going to MIT in 1973 to study and research in bioengineering, then still a relatively new discipline.

It was at MIT where he — together with one of the founders of bioengineering, Edward W. Merill — published his first paper on hydrogels in 1976, a class of polymer material which would help propel his career. Just a few years later Peppas and his team published their first paper demonstrating how hydrogels can be used as a drug-delivery system, and by the late 1990s, his lab was at the forefront of using hydrogels and biomaterials to orally deliver insulin as an alternative to daily injections.

As far back as the 1980s, Peppas and his group were the amongst the first researchers to use pH- and temperature-sensitive materials that deliver medicines upon a change in pH or temperature. In effect, he was a pioneer in “intelligent” biomaterials.

Alongside his scientific achievements, Peppas is well-known in the community for being a dedicated mentor and teacher, having supervised hundreds of undergraduate and graduate students over the years who have made names for themselves in their own respective fields. “His dedication to the ‘Peppamers’ is genuine and tireless,” Kristi Anseth told us, referring to the nickname given to Peppas’ students. “Nicholas has boundless energy and enthusiasm, and has trained hundreds of undergraduate and graduate students who have become brilliant academic and industrial leaders.”

Anseth herself is one such Peppamer to have gone on to greater things. A distinguished professor, her career has spanned surgery to biomaterials, and she became the youngest member ever to be elected to the National Academy of Engineering and the Institute of Medicine in 2009. She owes this career trajectory to Peppas. “As an undergraduate student at Purdue University in 1991, serendipitous events led me to Professor Nicholas Peppas and an opportunity to conduct my senior thesis in his lab. This singular encounter sent me on a path to consider graduate school and a career as a Ph.D. engineer and faculty member.”

Other notable Peppamers include Jennifer Sinclair Curtis, Esmaiel Jabbari, Antonios Mikos, and many more, all of whom build upon Peppas’ work and continue to research at the cutting-edge of biomaterials.

He is also known for his influence not just amongst his students, but fellow academics as well. “I have no academic connection with Peppas,” Xia told us, “but I read and loved many of his original publications on hydrogels for controlled release and drug delivery when I stared to move into biomedical research about 16 years ago.”

A thirst for knowledge

Peppas’ thirst for knowledge isn’t just confined to healthcare materials or even science. Outside of his research, Peppas is an avid writer and is a published book author. His subject matter? Greek opera. In 2008 he published a biography about Greek tenor, Vasso Argyris. His interest in history in general was influenced by members of his own family. His great-grandfather was an archeologist and his father an historian.

His love of knowledge made an impression on Xia: “I was really impressed by his positive attitude, sharp mind, and extensive knowledge. He seems to know everything and remember everything so well. It was truly an inspirational experience.”

The influence of Peppas’ work is going strong, with the next generation of researchers continuing to discover new breakthroughs in the field of biomaterials as a result of his tutelage. But Peppas himself continues to carry out this vital work. One of his most recent papers is a review on the cutting-edge of biomaterials used for RNA therapy — a burgeoning field in therapeutics, particularly since the successful use of RNA-based vaccines in the last couple of years — which discusses how nanomaterials could overcome the current limitations in effectively delivering RNA to target cancer cells.

But Anseth has the last word on what Peppas’ contributions are to the scientific community: “I will remember him best for the impact that he has had on the field in training future leaders.  This will be his enduring legacy.”