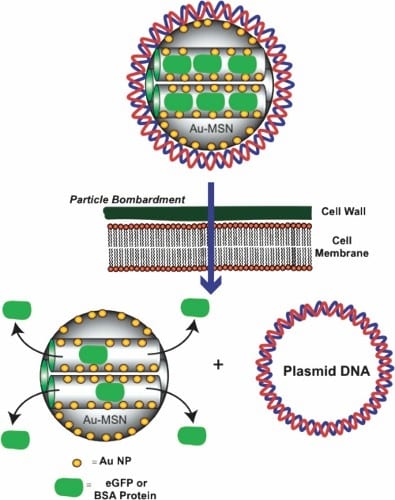 The scientific and technological literature is abuzz with nanotechnology and its manufacturing and medical applications. But it is in an area with a less glitzy aura—plant sciences—where nanotechnology advancements are contributing dramatically to agriculture. 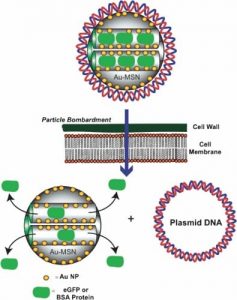 A diagram of the protein/DNA codelivery to plant cells.

Researchers at Iowa State University have now demonstrated the ability to deliver proteins and DNA into plant cells, simultaneously. This is important because it now opens up opportunities for more sophisticated and targeted plant genome editing—techniques that require the precise delivery of both protein and DNA to bring about specific gene modifications in crop plants. Such modifications are becoming more and more important in the face of our changing climates as new insect pests, plant diseases and soil stresses emerge where previously there were few.

While DNA delivery into cells has become routine, delivering proteins and enzymes to both animal and plant cells has proved more challenging. The Iowa State team’s protein delivery advancement is an important achievement toward this end.

Nanoparticles are tiny materials that are the size equivalent of several molecules sitting side-by-side or the size of a big virus. A single nanometer is one-billionth of a meter. The virus that causes AIDS is roughly 100 nanometers in diameter.

The first generation of these customized particles were relatively small (100 nanometers) and so the available packing spaces were unable to accommodate larger functional molecules such as proteins or enzymes. This next generation is five times the size (500 nanometers) and looks something like an ultra-fine piece of Honeycomb cereal.

The key to the researcher’s success is a newly devised method for making larger uniform pouches in the custom nanoparticles. An additional modification—gold plating the entire silica particle prior to packing—improved DNA and protein binding for a more secure payload.

To test the new particle’s effectiveness, Wang and her colleagues loaded the pores with a green florescent protein derived from jelly fish, which serves as a photo marker inside the plant cell. Next, these particles were coated with DNA encoding a red protein from coral. The complex was then shot into plant cells using a gene gun, a traditional gene delivery method that gets foreign material past the plant’s protective cell wall.

The gold plating innovation added some greatly needed ballistic heft to the particles, ensuring their ability to cannonball through the plant cell wall once released from the gene gun.

Cells that fluoresce both red and green at the same time confirm successful delivery. The team has demonstrated success in onion, tobacco and maize cells.

The work is a tangible realization of efforts the team had in the design stage just two years ago when colleague Victor Lin, unexpectedly passed away. “He was such a brilliant scientist,” says Wang. “We all felt completely lost when we lost him.”

But the team pulled together, capitalizing on the excellent training all had received from working with Lin to make this next generation particle a reality.

“We would have been unable to work out anything without each other,” says Wang. “This success proves his legacy continues.”