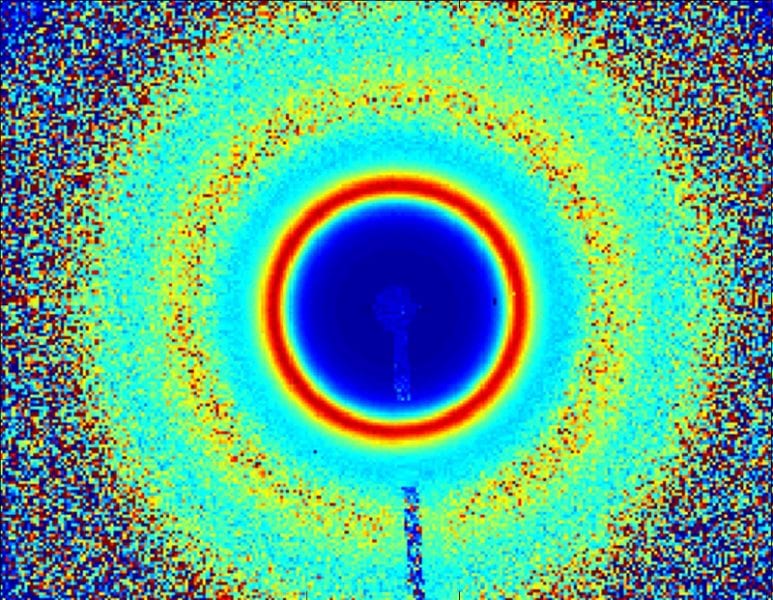 The craft of glassmaking extends far back in time. It was over five thousand years ago when mankind learned how to make glass. Even prior to this discovery, humans had been using naturally occurring glass for tool making. Despite this long and rich history and widespread use of glass, surprisingly little is known about the interplay between the mechanical properties of glasses and their inner structures. For the first time, researchers from Amsterdam University (The Netherlands) and DESY have now monitored subtle structural changes in a glass made from microscopic silica spheres, which they exposed to shear stress. Using a unique experimental setup at DESY’s PETRA III X-ray source, the scientists discovered coexisting structural states in the glass and related them to its flow behavior.

Glasses are substances that can transition from a fluid state into a non-fluid glassy state. Unlike water, which freezes from a fluid into an ordered solid, the glassy phase retains a fluid-like structure with little order. Nevertheless, the material becomes highly viscous or even hard in the glassy state. Numerous other materials, including metallic alloys, polymers, and colloids, exhibit a liquid-glass transition. “Toothpaste, for instance, behaves similarly to glass, and so do foams, gels, and crèmes,” says Dmitry Denisov, the study’s first author from Peter Schall’s group at Amsterdam University.

In their study, Denisov and his colleagues prepared a glass from silicon dioxide, or silica. They added silica spheres that were a mere fifty-millionths of a millimeter in diameter to water. Much like fat particles in milk, the spheres are dispersed throughout the water, forming what is known as a colloid. When the spheres make up 58% of the entire volume, the dispersion’s motion arrests – the colloid is in its glassy phase. For smaller volume fractions, the colloid remains in its liquid state. “Our spherical silica beads all have approximately the same diameter and the glass can be mathematically described rather easily,” Denisov explains. “Hence, our system is a good starting point for modeling more complex systems with a liquid-glass transition.”

The researchers were particularly interested in studying a phenomenon termed “shear banding”. When they shear the glass by moving its horizontal layers parallel to one another, the stress response in the glass is divided into two regions, or bands, in which particles move with different speeds. “Shear banding has been known for a long time. The different bands can be made visible with confocal microscopy, and mechanical measurements show that something happens in the sample,” says Denisov. “However, when we examined the interactions between particles in the different bands, we found the interactions to be the same. In fact, the structural differences between the two bands are so small that people initially thought they did not exist.” To prove otherwise, the research team turned to a more sensitive method.

At PETRA’s experimental station P10, the researchers filled their sample between two horizontal plates. One of the plates was stationary while the other was rotated to shear the sample. With this setup, called a rheometer, the scientists tracked the glass’ mechanical response, including changes in its viscosity. Simultaneously, PETRA’s intense X-ray beam traveled through the sample, examining its inner structure. When X-rays scatter off particles inside a sample, they form a characteristic scattering pattern behind it, from which researchers can gain knowledge of the sample’s structural order and the average particle-particle distances. “When we altered the shear rate in our experiment, we were able to see how the average distance between silica spheres in the glass varied,” says DESY scientist Bernd Struth. “These structural changes have never been seen before.”

Key to the experimentalists’ success was the unique geometry of the setup, which Struth designed together with DESY engineer Daniel Messner. The PETRA lightsource emits X-rays in the horizontal plane. However, liquid samples have to be probed vertically, since they have to be placed horizontally in order to prevent them from dripping out of the setup. X-rays are not easily redirected by a mirror, but a unique optical element deflects the beam so that it traverses the sample in a vertical direction. “The structural changes in the glass are very small,” Struth points out. “We can only measure them precisely when we average over a small amount of sample, which is only achievable in our geometry.”

The researchers determined that shear stress in the colloidal glass results in a higher structural order and an increased vertical distance between particles. Thereby, layers of the suspension glide along each other with more ease and, thus, shear flow in the sample is facilitated. “Normally, you would expect the shear stress in the sample to increase with the applied shear rate,” Struth says. In fact, this is what the researchers observed when they started rotating the rheometer’s plate faster and faster. “Above a certain shear rate, however, the mechanical response of the glass no longer changes. When we continue increasing the shear rate, the shear stress remains constant until we reach a second distinct shear rate, above which the stress becomes larger again.” The explanation for the region of constant stress is shear banding. “In this region, two bands with different velocities and viscosities coexist,” explains Denisov. “The bands change dynamically with the shear rate, but when we measure the shear stress in the sample, averaged over the two bands, the stress is constant.”

However, what exactly happens structurally in the shear banding region? “The structural parameters that we obtained from X-ray scattering correlate with the mechanical observations. The order and the average particle-particle distance in the two bands are different, suggesting that two different structures coexist,” Denisov says. “Previous studies indicated that the structure may be the same in the different bands. We proved that this is not the case.” Since the observed structural changes are very small, they have not been resolved in earlier studies.

In general, the researchers established that small structural variations in the colloid glass have a large impact on its flow behavior. For the smallest shear rate applied in their experiment, the viscosity of the glass was ten thousand times larger than the viscosity at the largest shear rate. In contrast, the observed structural change over the same range was only less than three percent. “Small changes in the glass structure on the microscopic scale correspond to large changes in the mechanical properties on the macroscopic scale,” Denisov summarizes.

“Our methodology enabled us to observe structural modifications in a glassy state that we know relatively little about,” Struth emphasizes. “The new data can be used in simulations that will improve our understanding of such systems.” Given the variety of systems with a liquid-glass transition and the widespread use of glasses in human culture, gaining insights into the intimate link between structure and flow behavior of glasses is an exciting perspective.