A new approach with the potential to overcome efficiency loss of solar cells. 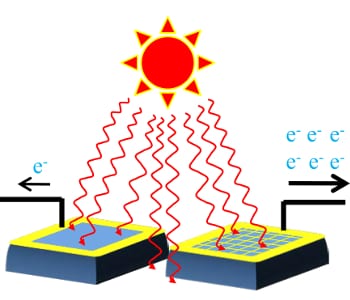 Over the last 50 years, in anticipation of the upcoming energy crisis, a tremendous effort has been applied to developing solar cells which can produce clean, inexpensive energy.  The first generation of these solar devices has already been widely applied commercially, and benefits people all over the world.

Despite this initial success, further improvements of solar cells are not only possible but also called for. Therefore, second and third generation solar cells have been designed and studied extensively, demonstrating the stunning potential that is still possible. 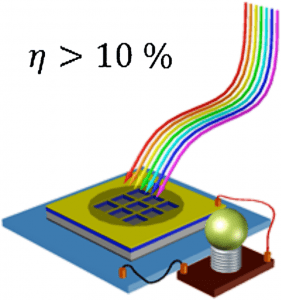 Heterojunction solar cells, based on silicon and single walled carbon nanotube transparent conducting films, are a typical example of the new generation solar cells. Until now, these solar cells have been prepared with very small areas that can capture sunlight. Simply increasing the working area of the device leads to a significant efficiency loss, due to an inherent limitation of the conductivity of the top, transparent electrode. Thus, additional conductive metal grids strategically placed on the surface can act as the current-collecting front contacts, which can help in overcoming this efficiency loss issue.

In a recent article published in Solar-RRL, scientists demonstrate that optimizing the grid design of the metal front contact results in a more than double the performance of the solar cell. Moreover, their results suggest that employing a patterned metal front contact is a scalable method to achieve new solar cells with efficiencies of above 10 %.

This groundbreaking approach has the potential to be applied in any other solar cells to overcome efficiency loss with increasing surface area.

Mystery solved: The origin of the colors in the first color photographs
Steel Manufacturer Working to Meet Climate Targets
Self-repairing electronics on the horizon
Microplastics are taking flight