Researchers have found a new way to switch magnetism that is at least 1000 times faster than currently used in magnetic memory technologies. 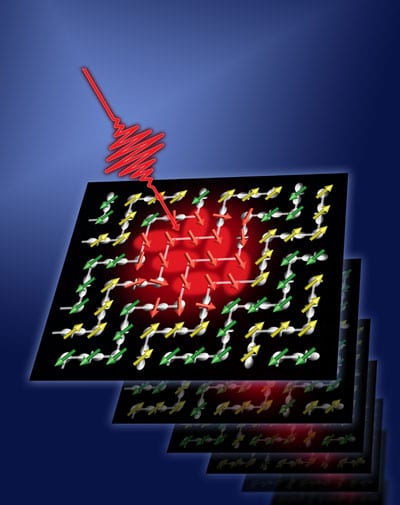 Magnetic structure in a colossal magneto-resistive manganite is
switched from antiferromagnetic to ferromagnetic ordering during
about 100 femtosecond laser pulse photo-excitation. With
time so short and the laser pulses still interacting with magnetic
moments, the magnetic switching is driven quantum mechanically
– not thermally. This potentially opens the door to terahertz
and faster memory writing/reading speeds.

Researchers at the U.S. Department of Energy’s Ames Laboratory, Iowa State University, and the University of Crete in Greece have found a new way to switch magnetism that is at least 1000 times faster than currently used in magnetic memory technologies. Magnetic switching is used to encode information in hard drives, magnetic random access memory and other computing devices. The discovery, reported in Nature, potentially opens the door to terahertz (1012 hertz) and faster memory speeds.

Ames Laboratory physicist Jigang Wang and his team used short laser pulses to create ultra-fast changes in the magnetic structure, within quadrillionths of a second (femtosecond), from anti-ferromagnetic to ferromagnetic ordering in colossal magnetoresistive materials, which are promising for use in next-generation memory and logic devices. A team led by Ilias E. Perakis, at the University of Crete developed the theory to explain the observation.

“The challenge facing magnetic writing, reading, storing and computing is speed, and we showed that we can meet the challenge to make the magnetic switches think ultra-fast in the femtosecond range – one quadrillionth of a second – by using quantum ‘tricks’ with ultrashort laser pulses ” said Wang, who is also an assistant professor of physics and astronomy at Iowa State University.

In current magnetic storage and magneto-optical recording technology, magnetic field or continuous laser light is used. For example, photo-excitation causes atoms in ferromagnetic materials to heat up and vibrate, and the vibration, with the help of a magnetic field, causes magnetic flips. The flips are part of the process used to encode information.

“But the speed of such thermal magnetic switching is limited by how long it takes to vibrate the atoms, and by how fast a magnetic field can reverse magnetic regions” said Wang. “And it is very difficult to exceed the gigahertz (109 hertz) switching speed limit of today’s magnetic writing/reading technology.”

So, some scientists have turned their attention to colossal magnetoresistive (CMR) materials because they are highly responsive to the external magnetic fields used to write data into memory, but do not require heat to trigger magnetic switching.

“Colossal magnetoresistive materials are very appealing for use in technologies, but we still need to understand more about how they work,” said Wang. “And, in particular, we must understand what happens during the very short periods of time when heating is not significant and the laser pulses are still interacting with magnetic moments in CMR materials. That means we must describe the process and control magnetism using quantum mechanics. We called this ‘quantum femto-magnetism.’”

Wang’s team specializes in using ultra-fast spectroscopy, which Wang likens to high-speed strobe photography, because both use an external pump of energy to trigger a quick snapshot that can be then re-played afterwards. In ultra-fast laser spectroscopy, a short pulse of laser light is used to excite a material and trigger a measurement all on the order of femtoseconds.

“In one CMR manganite material, the magnetic order is switched during the 100-femtosecond-long laser pulse. This means that switching occurs by manipulating spin and charge quantum mechanically,” said Wang. “In the experiments, the second laser pulse ‘saw’ a huge photo-induced magnetization with an excitation threshold behavior developing immediately after the first pump pulse.”

“Our strategy is to use all-optical quantum methods to achieve magnetic switching and control magnetism. This lays the groundwork for seeking the ultimate switching speed and capabilities of CMR materials, a question that underlies the entire field of spin-electronics,” said Wang. “And our hope is that this means someday we will be able to create devices that can read and write information faster than ever before, yet with less power consumed.”

Tianqi Li, Aaron Patz, Jiaqiang Yan and Thomas Lograsso collaborated on the experimental work at Ames Laboratory and Iowa State University. Leonidas Mouchliadis at the University of Crete and the Institute of Electronic Structure and Laser at the Foundation for Research and Technology – Hellas in Greece helped develop the theory used to interpret the experiments.